Anna McCue was an important organizer for the Congressional Union for Woman Suffrage. She was born in 1894 in Philadelphia, Pennsylvania.

Throughout her childhood McCue worked in the hosiery mills in Kensington, Philadelphia. Workers like McCue produced all types of knit goods, including hosiery, socks, fabrics, scarves and sweaters. In her youth, McCue joined the Lighthouse Girls’ Club, a multi-service club dedicated to improving the quality of life for Kensington residents. The Girls’ Club was active in the woman’s suffrage movement, and young McCue sprung into leadership by becoming the president of the Lighthouse Suffrage Society.

At the age of 22 McCue left her position at the mills to take a full-time position as an organizer for the Congressional Union for Woman’s Suffrage. McCue spent most of her time delivering speeches and advocating for woman’s suffrage and equality for women. Her work in the hosiery mills allowed her to engage crowds of women who understood the hardships that came with working for low wages in factories. Newspapers noted McCue’s references to industrial justice, which led to approval and cheers from the crowds she addressed. McCue was known as a compelling and powerful speaker. Because of her talents she was sent to other cities as a representative for the Union.

After spending the summer of 1914 organizing in Philadelphia, McCue was sent to Washington state. McCue was one of dozens of organizers, mostly paid, chosen by CU leader Alice Paul to travel west to persuade women voters to withdraw their support from the Democratic Party nationally until the party ceased blocking the constitutional amendment for suffrage. Since the Democrats controlled both houses of Congress, the CU hoped women voters could exert needed pressure.

McCue and Margaret Whittemore (another D.C. picketer) headed the Congressional Union headquarters in Seattle. McCue and other activists put up posters promoting the NWP around Seattle, hung large colorful banners outside of their headquarters, contacted local newspapers, and gave speeches at events. On one occasion McCue and Whittemore spoke at four gatherings in one day, leading the local newspaper, Seattle Star, to comment in their daily issue “they have a burst of speed that makes the busiest candidate green with envy.”

Despite her success in Seattle with some women, McCue was met with strong resistance from several organizations, including the Democratic Women’s Club. In a letter she wrote back to Paul she revealed that the organization “violently opposed” the work she was doing, and that negative influences from other factions in town made her believe “one is almost at a loss to proceed.” There is very little record of McCue’s activities following her stay in Seattle, however it is believed she returned to Philadelphia after her trip West. Cemetery records show McCue died in 1956 and is buried in Hermitage, Pennsylvania.

Anna McCue’s correspondence with Alice Paul during her time in Seattle is documented in Inez Haynes Irwin, The Story of Alice Paul and the Woman’s Party (Fairfax, VA: Denlinger’s Publishers, 1977). Information on McCue’s and other suffragists’ activities during their time in the Western states is included in Mary Walton, A Woman’s Crusade: Alice Paul and the Battle for the Ballot (New York: St Martin’s Press, 2010). The National Library of Congress has a photograph and short biography of McCue available at: http://www.loc.gov/item/mnwp000117. Philaplace, a website dedicated to documenting the history of Philadelphia neighborhoods, has details on McCue’s work with the Lighthouse Suffragist Society. See: http://m.philaplace.org/story/948/ See also http://www.philaplace.org/media/648/ for a photo of a 1919 newspaper photo of McCue as a suffrage speaker. Workshop of the World has information on their website detailing the activities of hosiery mill workers like McCue in the early 1920s. See: http://www.workshopoftheworld.com/kensington/kensington.html The website, Findagrave.com, includes a photograph displaying McCue’s grave in Hermitage, Pennsylvania. 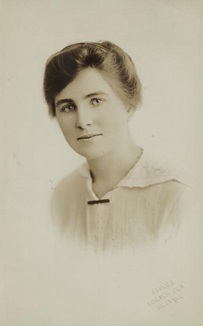