Skip to main content
Women and Social Movements »
What Factors Led to the Success of the Historic 1970 Sex Discrimination Complaint Filed against the University of Michigan?

THE MEDIUM IS THE MESSAGE

After months of dealing with the bureaucratic mechanism of the University of Michigan, puzzling over the cabals of the adversary relationship, and muddling through the "negotiation model" with ways-wise administrators, struggling feminists recently perceived one sweet, reasonable truth, elusive, apparently, for its brilliant simplicity. In a meeting with President Robben Fleming, the University's Commission for Women could not seem to convince him that he did not want to make a decision he wanted to make, regarding displacement of the Commission. Law student and Commissioner, Helen Forsyth observed to him "You go to coffee with men, you go to meetings with men, you go to lunch with men, but you never spend any time with women. You don't know anything about women! And that's the problem!" For the first time, it is said, in recorded history, Fleming blushed and made no response.

As a result of this oasis in a sand sea of verbiage, and because women are reasonable creatures who appreciate the importance of research (especially since the U of M is in the "Research Center of the Midwest"), data, and documentation, the AHCCTPFDNMWW (Ad Hoc Committee Concerned That President Fleming Does Not Meet With Women) formed and formulated their first project - the Spring Fleming-Follow. The Fleming Follow which purported to substantiate or disprove Forsyth's assumption, was a task force of a dozen women, on call, around the working day clock for one week. Its Modus operandi was simply to observe every person that President Fleming met with for a week, and record in detail the vital statistics of these individuals, as well as other less objective data. (See attachments 1 and 2).

The "Follow" obtained permission from Fleming's Administrative Secretary, Ms. Dorothy Mangus, to sit in an outer office, containing the floor receptionist, some empty chairs, copies of Life and Ebony and several formidable plants. Here they could watch who came off the elevator, who went around to the rear entrance to Fleming's office, and who came through the reception room, checked with the receptionist, checked, very often, with members of the Follow (who were after all, females) and finally found their way through the glass doors leading to Fleming's private reception room, office and conference room. Observers stationed themselves outside the office promptly at 7:45 each day (although this proved to be gross

overcompensation) to greet President Fleming when he arrived in the morning, and remained until the end of his working day. Through skillful espionage and constant support of the workers of the University, they also kept track of him at lunch.

Table I. Individuals by day, according to sex.

Table II. Graph, individuals by day, according to sex.

Table III. Individuals by day, according to race and sex.

Table IV. Individuals by day, according to age and sex.

Table V. Minutes spent with Fleming, according to age, race and sex.

Table VI. Number of visits made to Fleming, according to race and sex.

Greetings! Thank you for participating in the Spring Fleming Follow. We want to get as much information as possible on Robben's visitors, friends, and so on, but don't get yourself in trouble trying to find out anything. For example, you probably won't know the visitor's name in most cases. Don't rip off the appointment book or approach hostile subjects for it--just leave the space blank.

For demeanor: How does the visitor comport herself/himself? Casual or nervous? Smokes, carries briefcase?

For remarks: Anything which occurs to you, including (very important) a record of any interaction between you and the prey. Also information on vehicles driven, food eaten, location of meeting, etc.

PLEASE PUT THE DATE
AT THE TOP
OF
EACH PAGE

TABLE I. Number of individuals by day, according to sex.

TABLE II. Distribution per day, according to sex. 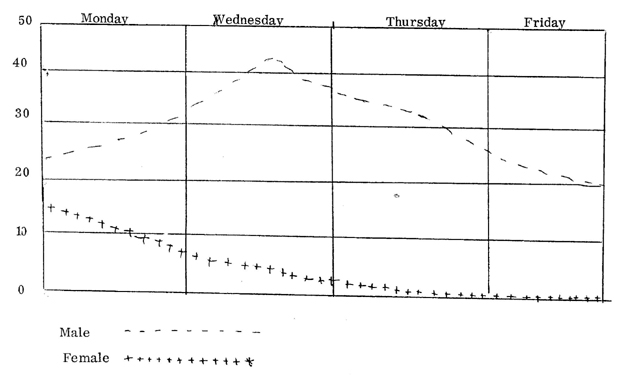 NOTE: The curve of the male pattern of visitation was a skewed bell, with a crest on Wednesday and a gradual tapering off to Friday. The female pattern was a steady downward curve, with the high point on Monday, and a nearparallel, close-to-rock bottom configuration on Thursday and Friday.

TABLE III. Individuals by day, according to race and sex.

TABLE IV. Number of individuals by age grouping and sex, per day. 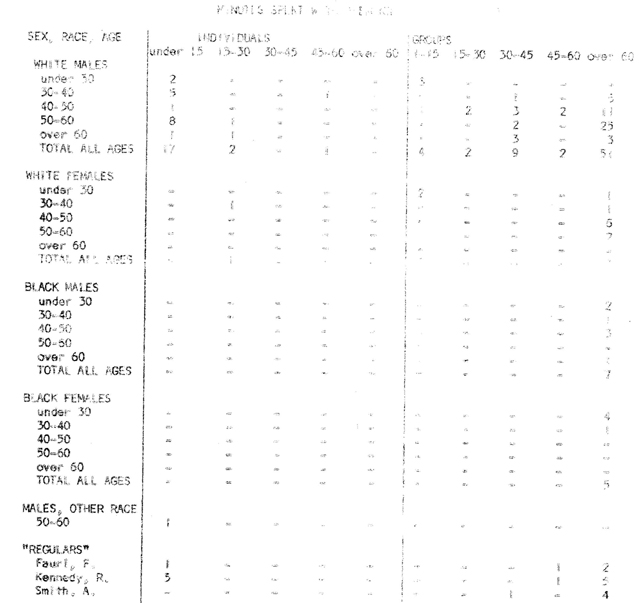 1. White Male tally does not include the white male "regulars"

2. White and Black Female tallies do not include the secretaries who work in Fleming's office area.

3. White Female tally does not include one group of (...) white females, it was unclear whether they actually had an audience will His Holiness.

1. White Male totals do not include visits made by white male "regulars". Totals for white males including the "regulars" are: individuals, 26 visits

Members of the team found that the central hypothesis was not totally supported. Over the course of the week, Fleming saw a total of 21 women out of a total of 145 persons. However, Fleming himself admitted to having accidentally scheduled a disproportionately large number of meetings with women that week. Other interesting ideas emerged during the course of the observations. Women with whom Fleming met were generally integrated with a group that had 50% or more males in it. (e.g. The Regents, Students Against the Air War in Vietnam, the Black student group). What is the role of women in these groups? Are they in parallel leadership roles with men? Virginia Nordin, Chairwoman of the Commission for Women, and the only woman on a reasonably high central administrative level, was the only woman he met with singly, as opposed to 26 single meetings with men (all white). Nordin's appointment lasted about 18 minutes, and happened to be a standing one, occurring every two weeks.

From the tables and from copious notes on vital statistics, we project that the person most likely to have an appointment with President Fleming on a given day of the week, at a given time is: male, white, 50-60 years of age, 5′10″, 170-175 lbs, somewhat out of condition, although not radically obese, balding, with a gray to gray-white fringe, dressed in a blue suit, red tie and white shirt, previously acquainted with Fleming, comfortable entering through the back door of the office, comfortable to the point of either ignoring the President's secretaries or joking and flirting with them, exhibiting an air of self-confidence, and likely to remove his suit coat at some point of the meeting with Fleming.

The person least likely to have an appointment with President Fleming on a given day at a given time is: female, over 60 years of age, a non-black minority group member, over 5′10″ in height, over 150 lbs in weight, with erect posture, red-haired, employed as a secretary or waitress, confident, aggressive, laughing and happy, with a previous acquaintance with Fleming, entering through the back door of his office, dressed in jeans, Sandals, tee-shirt and braless.

It is noteworthy that several of the same people met with President Fleming more than once during the course of the week. Most frequent repeaters were:

Richard Kennedy, Secy of the University, a total of 11 times.

Allan Smith, VP for Academic Affairs, a total of 5 times. (It is interesting to speculate why Smith was, on an average of 14.3 minutes late to all meetings that included others besides himself).

Fedele Fauri, VP for State Relations and Planning (and also the VP most directly charged with overseeing the Commission for Women), a total of 4 times.

In addition to the antiseptic reception room, observers felt that Fleming's own reception room was generally formidable, intimidating, very quiet and somewhat joyless. Four secretaries are posted outside Fleming's office in a symmetrical seating arrangement. (See Figure 1). The wall space between Fleming's office and his conference room has prints of the American flag on the left, and the State of Michigan flag on the right. By contrast, the art work outside in the reception room where the "Followers" sat is either abstract-modern, or vegetative--sexual. (See Fig. 1) Followers were interested in a print across from the desk they used, of three spatulate leaves mounted on two testicles. The secretaries exhibit model conduct: they do not laugh or tell jokes or fool around (unless to please a visitor and occasionally at us); they do not chew gum; they do not smoke cigarettes; they do not eat cookies, candy, sweet rolls, fruit etc. 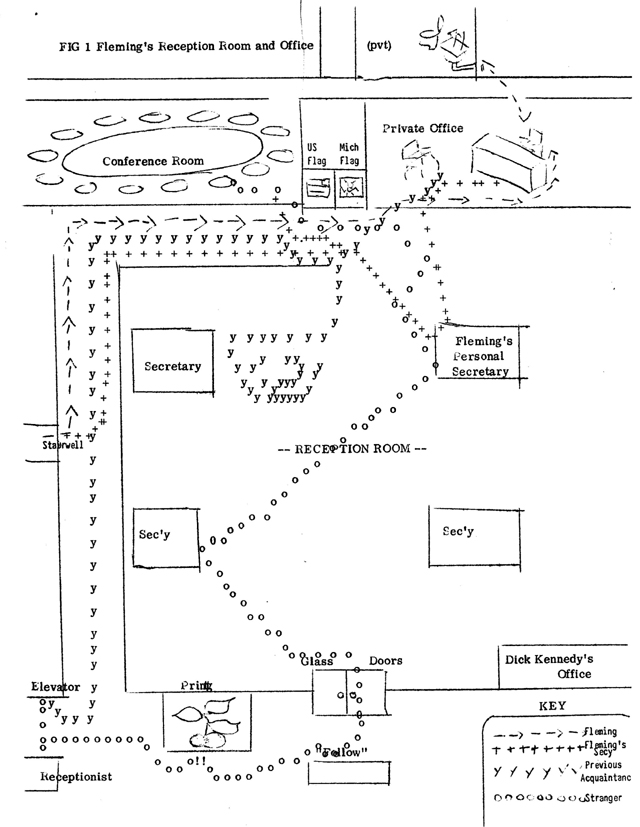 The research team found that for the most part they were viewed with humor, curiosity, contempt, and because they were all female, as part of the secretarial function of the office. Typical remarks made to team members varied from:

"Did I hang my coat in there?

"I am here to see President Fleming."

"Where can I get some coffee."

"Would you please send Mr. X in when he arrives, tell him such-and-such, and I'll be back in an hour."

"I haven't seen anyone I like yet." (male member of the Search Committee for Dean of Nursing)

"Fauri's going to send his secretary in a couple of times."

"I hear we are supposed to report to you." (female, Search Committee for Dean of Nursing).

Although the central hypothesis was not totally supported in numbers, we feel that it was supported in principle, for reasons given in the "Observations". Exclusion of women from the President's company, and in a strong sense from a very important decision-making mechanism, is observable in more than just sheer numbers.

While President Fleming does meet with the incredibly few women who do hold positions of esteem and power in the University, these numbers are so small that they cannot begin to counteract the male influence which vastly outweighs them. President Fleming does meet with women in groups of a heterosexual composition which have political or administrative functions, but our sense is that these women are subordinated to the men in the groups, and do not necessarily have the opportunity to speak to the President on women's concerns and issues.

What is more, no women, singly or in groups, participate in the life-style of the male administrators with whom Fleming makes most of his decisions, and by whom he is most influenced. Women are not walking into his office for a moment to drop a few

casual remarks, even if they don't have an appointment. The only woman who walks into his office freely is his personal secretary, to serve him.

For the above reasons, we feel that the President is likely not conversant with issues of burning importance to women at the University, and cannot be expected to make informed decisions about women's matters.

A. Wilbur K. Pierpont, vice president and chief financial officer of the University of Michigan.
Back to Text

B. Equal Employment Opportunity Commission, the federal agency broadly responsible for responding to discrimination complaints.
Back to Text

C. The University's Center for the Continuing Education of Women.
Back to Text