Skip to main content
Women and Social Movements »
What Factors Led to the Success of the Historic 1970 Sex Discrimination Complaint Filed against the University of Michigan? 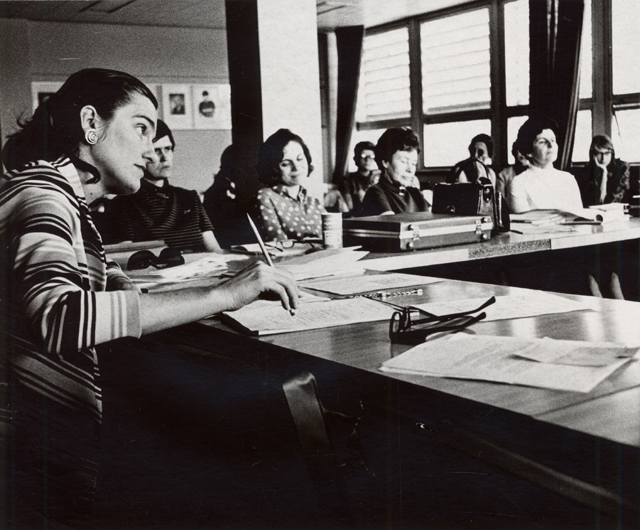 This letter from the membership of PROBE, the ad hoc group of University of Michigan women who supported the HEW sex discrimination complaint, reflects a change that occurred on campus in early 1971. With University President Robben W. Fleming's appointment of the Commission on Women, advocates now had an institutional means to help them pursue changes in campus policies.

Although Fleming appointed the commission's original members, and they included high-ranking University administrators, the letter makes clear that some commission members were now raising questions about the University's stances on the issues involved in the complaint.

The memo addresses the continuing debate over whether HEW jurisdiction included graduate school admissions, an issue that was left to HEW Secretary Elliot L. Richardson to resolve, but which, in fact, he never did. PROBE again raised the question that commission member Barbara Murphy apparently raised at the most recent commission meeting: "Why is the University Administration so strongly resisting HEW's claims in the area of admissions?"

In order to balance Mr. Lemmer's[A] views on jurisdiction over graduate admissions, we're sending you the legal opinion of Mr. Edward Levy, an HEW attorney.[B] (see Enclosure 1). If you have difficulty reading this memo, the University Administration could provide you with a cleaner copy.

Mr. Levy's opinion raises some interesting questions, and we would like to share our research and thinking on these matters with you.

1. Should an agency of the federal government have a role in the matter of graduate admissions?

a. The federal government already concerns itself with race discrimination in college admissions.

b. The availability of federal money in some areas of study strongly affects department size and therefore admissions. Longstanding efforts of the Selective Service to channel students have had a similar effect.

c. The University Administration, by accepting federal contracts and by its somewhat reluctant cooperation with HEW investigators has acknowledged the legitimacy of federal interest in University practices.

It seems to us, then, that government involvement in the admissions process has long ceased to be a theoretical matter and is an existing fact.

2. Should HEW be permitted to investigate discriminatory admissions practices in programs which have an employment aspect?

a. Working students are employees of the University. Teaching fellows, interns, and research assistants fall within the common law meaning of the word employee (see, for example, 6 Mich. App. 104, People v. Kirstein--"Meaning of Employee of Servant: An employee or servant, in common usage, is one who performs tasks for compensation under the direction, control, or supervision of another."). The Michigan Employment Relations Commission (MERC) recently found the Interns and Residents Union to be an employees' representative.[C]

b. Most Ph.D. programs have employment aspects. Consider the following situations:

(1). In some instances, teaching is required of the Ph.D. candidate, making employment unseverable from admissions.

(2). In some job categories (e.g., teaching fellows) virtually all employees are Ph.D. candidates. Once again, the job is unseverable from admission.

(3). In all but highly unusual cases, students do work for the University in the course of graduate study.

(4). In some departments, admissions is predicated on the ability of the department to provide financial support for the student.

c. Labor Department guidelines for the enforcement of Executive Orders 11246 and 11375 clearly require non-discrimination and affirmative action in training programs. Since the only training program for college teaching is the Ph.D. program, the guidelines seem to apply to graduate admissions.

If, in keeping with Ms. Stadler's[D] suggestion, you decide to consult with other attorneys, you will surely get other views and insights on these questions. contrary to Mr. Lemmer's implication, HEW's lack of jurisdiction in this matter is not immutably established. Clearly there is a difference of legal opinion. In this connection, it is unfortunate that Barbara Murphy's[E] question went unanswered at Friday's meeting and we raise it again here: why is the University Administration so strongly resisting HEW's claims in the area of admissions?

Admissions are a thorny problem, and some pressure will surely have to be exerted before the problem can be adequately investigated and solved. Federal authority could be instrumental in enforcing more just practices. The University Administration does, theoretically, represent a community with a strong historical commitment to liberality and equity. We must work together to see that these commitments are extended to women.

We again urge you to make known your views on admission policy to Secretary Richardson before he arrives at his precedent-setting decision.

From the Membership of PROBE

Robben Fleming, President of The University of Michigan

A. William P. Lemmer was a University lawyer who specialized in labor affairs.
Back to Text

B. Edward Levy, attorney in the general counsel's office at the U.S. Department of Health, Education and Welfare (HEW), had participated in negotiations between University administrators and top departmental officials.
Back to Text

C. During this time period, the University was also challenging the efforts of the Interns and Residents Association to be recognized as a union representing the University's medical students, arguing that the young doctors were students, not employees.
Back to Text

E. Barbara Murphy, then a procedures analyst for the University of Michigan's Survey Research Center, was one of the first appointees to the Commission on Women.
Back to Text

F. Rose Brock was an investigator with HEW's Office of Civil Rights who was put in charge of supervising compliance reviews related to sex discrimination.
Back to Text

G. John Hodgdon's title was director of the Chicago regional office of HEW's Office of Civil Rights.
Back to Text

H. Jean King was one of the two women who filed the original complaint to HEW on behalf of FOCUS on Equal Employment for Women.
Back to Text

I. Ann Scott, an English professor at the State University of New York at Buffalo, led the efforts of the National Organization for Women to address sex discrimination in higher education.
Back to Text