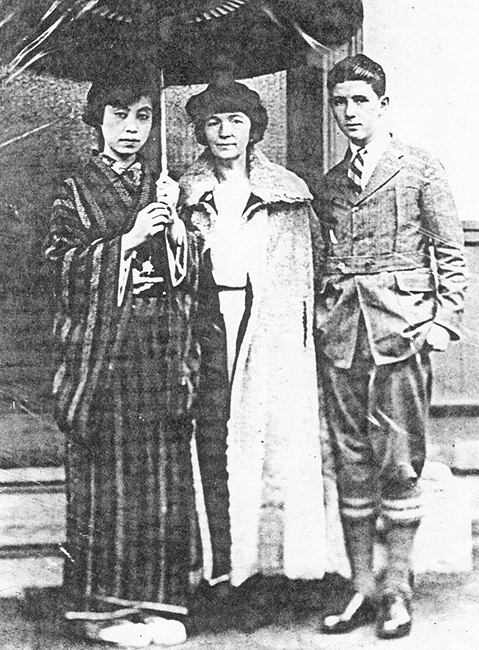 Many articles on birth control appeared in Japanese magazines and journals in the spring of 1922, following Sanger's lecture tour. Sanger herself published articles in the journals Kaizô and Fujin kôron, and in the women's magazine Shufu no tomo. A number of other commentators published endorsements of the movement, analyses of Sanger's message and opposition pieces. In the following article, Shidzue Ishimoto, who had emerged as the leading proponent in the Kantô region (which included Tokyo and Yokohama), offered yet another strong feminist argument for birth control.

Practicing birth control is the first requisite for women's liberation. In thinking about motherhood, [it must be remembered that] we women are no longer living in the era when women were bound by slavish morality and resigned themselves to it as women's obligation. The concept of motherhood becomes meaningful in that women can choose to have children of their own free will when they become entitled to be a mother physically, mentally, and economically. In this sense, birth control can be understood as "voluntary motherhood."

Mrs. Kikue Yamakawa, who has always guided us, also claims that free motherhood through birth control is the first key to liberate women. In her recent work, Women and the New Race,[A] Mrs. Sanger is presenting her perspectives on this problem as follows:

"The key issue is the living standard of a large majority, so we must first consider [the lives of] working-class women. The working hours of men, both middle- and working-class, are limited by law, but women must work not only eight hours but over twelve hours every day. It is men and children who have food first, if there is any, and women are always the last to be fed. In most families, women are the ones most likely to starve first, wear thinnest cloth, and work hardest. Moreover, frequent pregnancy ruins their health, and some even loose their lives. There is a factory law that offers female workers protection when they become pregnant (there is no equivalent law in Japan, but the Health Insurance Law will soon come into force, and women will begin to receive protection), but it is not enough as long as no attempt is made to establish a law to protect women within the household against ill health and diseases of pregnancy.

There are a few statistics on deaths and diseases related to pregnancy and childbirth. In 1916, 65 percent of the women afflicted with tuberculosis died as the result of pregnancy. According to a [1913] survey on women from 15 to 44 years old, the death rate from diseases complicated by pregnancy was the second highest. The death rate from tuberculosis was the highest, but if more than half of them actually died of tuberculosis complicated by pregnancy, we can say that the first cause of women's death is unwanted, repeated pregnancies.

As for mental issues, children are destined to receive love from mothers, which is a necessary factor in children's development. However, children of mothers exhausted from pregnancy are often unhealthy, and mothers busy with housework have no time to kiss their children. These mothers cannot train their children or give them sympathetic guidance. In some cases, they even prevent children's development. Under this condition, it is a misfortune to be a mother and a tragedy to be her child.[B]

It goes without saying that these physically and mentally ill mothers have no opportunity to express their opinions to the public and cannot increase their social knowledge or enjoy cultural lives. Their beauty and noble spirit--although they usually do not blossom because of the heavy burdens described above--will fade away. They are just breeding machines and will be nothing forever unless their families support the idea of limiting the number of children.

Meanwhile, there is another group of women who are in an opposite condition. They are living full lives with a proper number of children. This does not necessarily mean that they belong to the wealthy class of women. These examples are found more often among working-class women. Needless to say, one point of difference between them and [women with many children] is whether they are burdened with heavy loads because of large families or not.

Furthermore, what the readers should remember is that without relying on historians, sociologists, or statisticians, we can see from actual examples in everyday life that the women, who are great teachers, artists, writers, scientists, and leaders of social movements, are those who have not wasted their physical and mental strength [in bearing and rearing large families]."[C]

Neither do we need to rely on Mrs. Sanger for the knowledge of the situation. We can see in front of us women who are in conditions several times more miserable than the examples Mrs. Sanger offers. We must have more meaningful lives by liberating ourselves from traditional roles defined by the ideology of blind, slavish motherhood. Some people oppose our birth control movement as immoral, but I think they are slaves to convention trying to make us ignorant, blind slaves. We will go the way opened for us because we find a strong moral law there.

A. Sanger published Woman and the New Race, her feminist argument for birth control, in 1920.
Back to Text

"The women of this class are the greatest sufferers of all. Not only do they bear the material hardships and deprivations in common with the rest of the family, but in the case of the mother, these are intensified. It is the man and the child who have first call upon the insufficient amount of food. It is the man and the child who get the recreation, if there is any to be had, for the man's hours of labor are usually limited by law or by his labor union."

"It is the woman who suffers first from hunger, the woman whose clothing is least adequate, the woman who must work all hours, even though she is not compelled, as in the case of millions, to go into a factory to add to her husband's scanty income. It is she, too, whose health breaks first and most hopelessly, under the long hours of work, the drain of frequent childbearing, and often almost constant nursing of babies. There are no eight-hour laws to protect the mother against overwork and toil in the home; no laws to protect her against ill health and the diseases of pregnancy and reproduction. In fact there has been almost no thought or consideration given for the protection of the mother in the home of the workingman.

"There are no general health statistics to tell the full story of the physical ills suffered by women as a result of too great reproductivity. But we get some light upon conditions through the statistics on maternal mortality, compiled by Dr. Grace L. Meigs, for the Children's Bureau of the United States Department of Labor. These figures do not include the deaths of women suffering from diseases complicated by pregnancy."

"In 1913, in this country at least 15,000 women, it is estimated, died from conditions caused by childbirth; about 7,000 of these died from childbed fever and the remaining 8,000 from diseases now known to be to a great extent preventable or curable," says Dr. Meigs in her summary. "Physicians and statisticians agree that these figures are a great underestimate."

"Think of it--the needless deaths of 15,000 women a "great underestimate"! Yet even this number means that virtually every hour of the day and night two women die as the result of childbirth in the healthiest and supposedly the most progressive country in the world."

"It is apparent that Dr. Meigs leaves out of consideration the many thousands of deaths each year of women who become pregnant while suffering from tuberculosis. Dr. S. Adolphus Knopf, addressing the forty-fourth annual convention of the American Public Health Association, in Cincinnati in 1916, called attention to the fact that some authors hold that "65 per cent of the women afflicted with tuberculosis, even when afflicted only in the relatively early and curable stages, die as the result of pregnancy which could have been avoided and their lives saved had they but known some means of prevention." Nor were syphilis, various kidney and heart disorders and other diseases, often rendered fatal by pregnancy, taken into account by Dr. Meigs' survey."

"Still, leaving out all the hundreds of thousands of women who die because pregnancy has complicated serious diseases, Dr. Meigs finds that "in 1913, the death rate per 100,000 of the population from all conditions caused by childbirth was little lower than that from typhoid fever. This rate would be almost quadrupled if only the group of the population which can be affected, women of childbearing ages, were considered. In 1913, childbirth caused more deaths among women 15 to 44 years old than any disease except tuberculosis."
Back to Text

"It goes without saying that this woman loses also all opportunity of personal expression outside her home. She has neither a chance to develop social qualities nor to indulge in social pleasures. The feminine element in her--that spirit which blossoms forth now and then in women free from such burdens--cannot assert itself. She can contribute nothing to the well-being of the community. She is a breeding machine and a drudge--she is not an asset but a liability to her neighborhood, to her class, to society. She can be nothing as long as she is denied means of limiting her family."

"In sharp contrast with these women who ignorantly bring forth large families and who thereby enslave themselves, we find a few women who have one, two or three children or no children at all. These women, with the exception of the childless ones, live full-rounded lives. They are found not only in the ranks of the rich and the well-to-do, but in the ranks of labor as well. They have but one point of basic difference from their enslaved sisters--they are not burdened with the rearing of large families."

We have no need to call upon the historian, the sociologist nor the statistician for our knowledge of this situation. We meet it every day in the ordinary routine of our lives. The women who are the great teachers, the great writers, the artists, musicians, physicians, the leaders of public movements, the great suffragists, reformers, labor leaders and revolutionaries are those who are not compelled to give lavishly of their physical and spiritual strength in bearing and rearing large families. The situation is too familiar for discussion. Where a woman with a large family is contributing directly to the progress of her times or the betterment of social conditions, it is usually because she has sufficient wealth to employ trained nurses, governesses, and others who perform the duties necessary to child rearing. She is a rarity and is universally recognized as such."
Back to Text