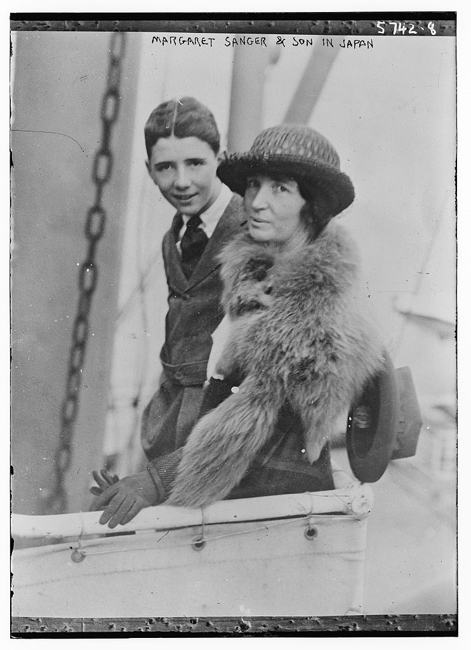 The Taiyo Maru stopped in Honolulu on February 27 before proceeding on to Japan. Two days from Yokohama, Sanger's status remained unresolved; she had received no clear indication she would be able to disembark. Nevertheless, she continued to discuss her status with dignitaries on board and to receive additional speaking invitations from the mainland. Sanger summarizes her situation in the following letter to American Birth Control League colleague, Anne Kennedy.

We are nearing the end of our trip-- My landing is still mysterious, though from the various invitations I am reciving to speak before representative groups, it would seem I must be going to land.

In order to save my writing the same things to all of you--please pass my letters on to each other to read. If there is anythin personal or private Ill mark it so. But if you & Anna & Clara Louise exchange letters & file them away for my return it will save me a load of repetition and keep you all informed at the same time. This Doctors association at Kyoto

is said to be very powerful as there is an Imperial University at that place. So it may do lots of good, to go there, though it is thirteen hours railroad journey from Tokio.

Grant is enjoying new friends--several college fellows are on board. Young men from Yale & Cornell who have lived in U.S.A. for six & seven years--just going back to Japan & knowing fully that they will not fit in with their home life again. Its interesting for Grant all of it.

You would rejoice over the kindness the various Japanese on board have shown toward me. Many of those, prominent delegates, have already cabled to Tokio to advise authorities to allow my enterence [sic] into Japan. Yesterday I addressed a group of fifty second class passengers. One young couple from

R.I. were old friends of the cause and Subscribers to B.C.R.

Today I am to have a private session with about a dozen or more elderly women on board, who are going to Pekin for that International Christian conference {YMCA YWCA} forgot just what it calls itself.

and Mrs Mott has asked me to speak before the women delegates today.

Oh dear Anne Kennedy "it moves" "it moves"-- The enclosed cables show that it will move in Japan also. When I get the idea well going in Japan I want to get a good hold on China. So I may remain longer in China than I first

anticipated.[A] There is every reason to believe the movement will get a splendid start in Japan. I await with interest the results of all this publicity. There has been tremendous interest all through Japan & if I address all the people who are asking me I shall be worked thin. I am writing Clara Louise about my Honolulu trip & lecture.

Be sure to bring to London some of our Reviews & some of our literature, these Principles & Aims are good also "What BC will do" is good & simple.[B]

I have had a good lazy trip, rested fully and am now ready to "eat 'em alive." I long to hear from you. Shall cable if I land & shall keep you fully informed. Mrs Brandt wants to know about my trip. So keep her

informed of my letters & read them to her if she wants it.

All love to you-- ever lovingly

Am dying to see the Review.[C] I dreamed about it last night rather disturbing dream about a newly published book also. But it means nothing I guess. As always

[Written on top margin of first page] Show enclosed telegrams to Anna & ask her to tell news the Japanese at 246 W 14.

A. Sanger toured China from April 8 to May 10.
Back to Text

B. Sanger refers to American Birth Control League publications "Principles and Aims of the American Birth Control League," November 1921 (Reel C12, frame 132 of Katz, Margaret Sanger Microfilm, Collected Documents) and "Birth Control--What It Will Do?" a listing of birth control benefits to women, families, and societies, later published as part of a pamphlet entitled "The Greatest Need in America," (Harvard University Library, Digital Collections http://pds.lib.harvard.edu/pds/view/3003799?action=jp2pan&imagesize=1200&x=-1&y=-1&jp2Res=.25&rotation=0&n=4&op=j&thumbnail.x=41&thumbnail.y=57) "Principles and Aims" was also published as an appendix to Pivot of Civilization; and "Birth Control--What it Will Do," was published in English as part of Chinese scholar Hu Shih's diaries, Hu Shi ri ji quan ji [Taipei: Lian jing chu ban gong si, 2004, reprint].)
Back to Text

C. Sanger refers to the February 1922 issue of the Birth Control Review, [BCR] which featured a tribute to Havelock Ellis, an article on delinquent women by Virginia Young, and a discussion of the sterilization of the unfit by Norman Haire.
Back to Text