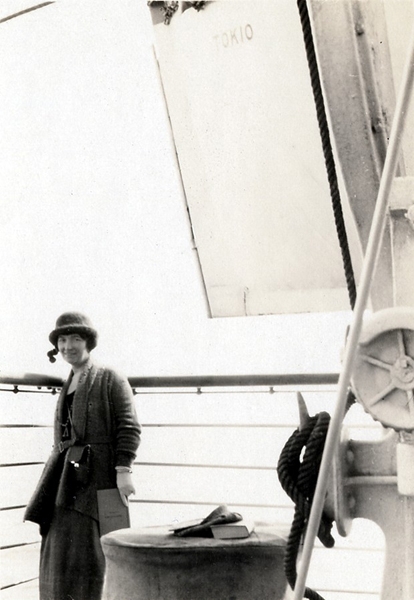 Sanger extended her ticket on the Taiyo Maru to Shanghai with the hope that she could convince one of the many Japanese officials on board, returning from the Washington Conference on Disarmament, that she did not pose a threat and could disembark in Yokohama. This letter, written to her close friend, British author Hugh de Selincourt (1878-1951) two days before she sailed from San Francisco, reflects her determination to create positive publicity and keep public pressure on the Japanese government.

Did I thank you for the ripping tribute to our King? It reads splendidly as I hovered over it last night in the B.C.R. Here many persons spoke of its literary quality and Chicago group ordered a bundle of Reviews just to send your article on to people--new ones.[A]

So you see what you can

do for this cause when you set to work at it. I do wish Hugh blessed you would send in now & then some thing of your very own--a review an essay an--oh anything you think worth while writing. I simply adore your 1922 Tribute to H.[B] and give you a life job of sending me something each February about him as long as he lives-- Agreed? So!

Here I am blocked again Japanese gov't from Tokio refuse to let me come to their fairy land & I am sad & unhappy. I am sailing on Tuesday as scheduled Feb 21--and have had to extend my ticket to Shanghi. Trusting the gods will arrange it with the Tokio government in the meantime to change & allow me to step upon their precious Island.

I shall be greatly upset if I can not do this. I am contracted to give five lectures, but I hear now that Bertram Russell had difficulty also. Same government.

I am besieged with Japanese reporters who are so polite & kind & bow so nicely over my hand & smile so encouragingly into ones eyes--that I am enchanted already & want to go to Japan!

I feel like a naughty girl & want to bang on their door & stamp my foot & that failing to open it--to kiss the door and make it open.

Anyway Im going. And I as I believe in gods & fairies I'll have faith in their power. In the meantime all Japan is excited over this arbitrary

ruling against a little woman no body knows much about. Parliament may take a hand so a reporter said today:

Hugh dear--I cant hear from you for ages-- Ill be going to India & around by Italy & France & arrive in London July first unless I stop in Spain to see Havelock. But Im to be at the B.C. [Conference]

in London July first.[C] So shall see you & you shall see Grant.

I have him with me & we expect to have such fun together. Perhaps I can leave him at your house with Bridget while I confer at B. Control. yes? I shall write you from time to time. love to Janet, Harold & a big hug to you ever lovingly

A. The Birth Control Review [BCR] was a monthly journal published by Margaret Sanger since 1917, made up of birth control articles, reviews, and news of activities in the United States and around the world. The newly-formed American Birth Control League assumed charge of its publication after November 1921.
Back to Text

B. Sanger refers to de Selincourt's tribute to British sexologist Havelock Ellis (1859-1939) in the BCR.
Back to Text