Skip to main content
Women and Social Movements »
The Ladder: A Lesbian Review, 1956-1972: An Interpretation and Document Archive 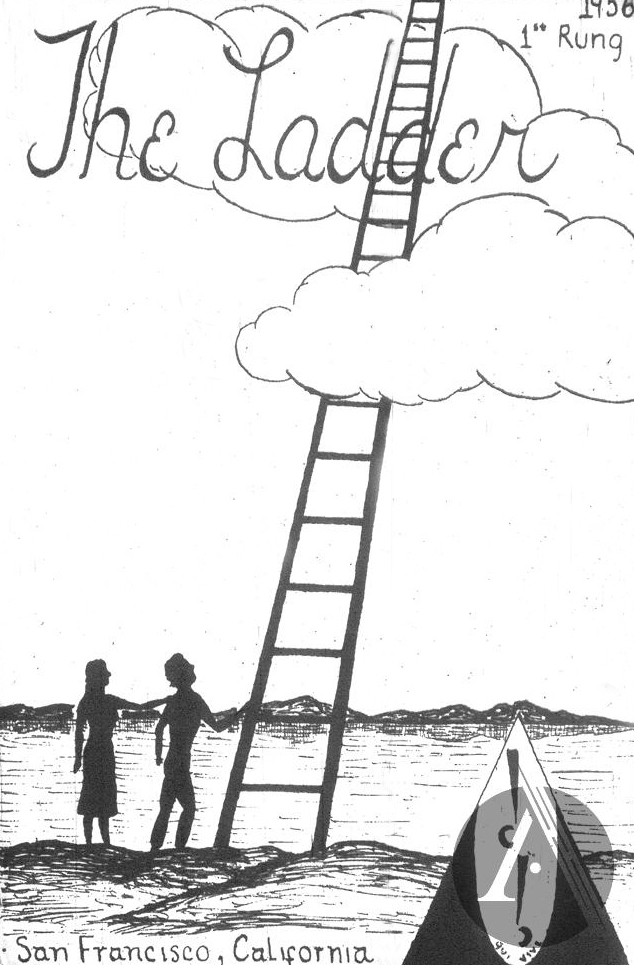 Published monthly in San Francisco, California, by the Daughters of Bilitis

We are sending this first issue to you with our compliments in order to acquaint you with our organization and the work we are doing.

However, in order to help defray publishing expenses we are asking for donations of $1.00 for one year of THE LADDER. If you wish to receive future issues and to help the cause please send in the questionnaire on page 12.


Just one year ago the Daughters of Bilitis was formed. Eight women gathered together with a vague idea that something should be done about the problems of Lesbians, both within their own group and with the public.

The original idea was mainly that of providing. an out let for social activities, but with discussion came broader purposes and the club was formed with a much wider scope than that originally envisioned, as can be seen from the club "Purpose" on page 4.

The eight charter members, with a constitution, by-laws and a name, started out to find more members. And this has been the biggest problem in this first year.

As our President has so aptly pointed out in her message, "the Lesbian is a very elusive creature". Membership has fluctuated from a low of six to the present 15, and only three of the eight charter members remain. But the basic need for, and validity of, such a club continues, and our membership is growing.

This membership is open to all women over 21 who have a genuine interest in the problems of the female homophile and the related problems of other minorities. Initiation fee is $5 for active and $2.50 for associate members, with monthly dues of $1 for the former and 50¢ for the latter.


poem written by Pierre Louys and published in 1894. Bilitis would seem to have been a contemporary of Sappho on the isle of Lesbos, and the poem is purported to be a translation from the Greek. Although it has been more or less conclusively established that the poem is not authentic, it presents a sensitive and searching picture of Lesbian love.

Our organization is endeavoring to develop a program of interest to all. This includes our monthly public discussion meetings featuring speakers from local business, professional and medical fields; monthly business meetings; and brunches, parties, picnics and beach parties, bowling, horseback riding and other social events.

This newsletter we hope will be a force in uniting the women in working for the common goal of greater personal and social acceptance and understanding. With this first issue we enter a field already ably served by "One" and "Mattachine Review". We offer, however, that so-called "feminine viewpoint" which they have had so much difficulty obtaining. It is to be hoped that our venture will encourage the women to take an ever-increasing part in the steadily-growing fight for understanding of the homophile minority.

Suggestions and constructive criticisms are urgently solicited, as is your support, aid and assistance. Full information may be obtained by writing Post Office Box 2183, San Francisco 26, California.

The Daughters of Bilitis is not now, and never has been, affiliated with any other organization, political, social or otherwise.

Sunday, Sept. 30--Picnic at Samuel P. Taylor State Park. $1.00. Transportation and food will be provided. Reservations must be made by Friday night, September 28 Phone Plaza 6-3382.

Tuesday, Oct. 23--Panel discussion at 465 Geary St., Studio 51, at 8:15 p.m. Subject will be "What Are You Afraid Of?", the first in a series of discussions on Lesbian fears--both real and imaginary. On the panel will be Pat Hamilton and Del Martin, Dr. Vera Plunkett will act as moderator.

Guests will be more than welcome to all events except the meeting on Oct. 11. The picnic on Sept. 30 will be an excellent opportunity for newcomers to get acquainted and to learn more about our group. The discussion meeting will be the first of a series to bring FEAR into the open and deal with it. Future speakers will include a lawyer, social worker, psychiatrist, and others.

Since 1950 there has been a nationwide movement to bring understanding to and about the homosexual minority.

Most of the organizations dedicated to this purpose stem from the Mattachine Foundation which was founded in Los Angeles at that time. Members of these organizations The Mattachine Society, One, and National Association for Sexual Research--are predominantly male, although there are a few hard working women among their ranks.

The Daughters of Bilitis is a women's organization resolved to add the feminine voice and viewpoint to a mutual problem. While women may not have so much difficulty with law enforcement, their problems are none the less real--family, sometimes children, employment, social acceptance.

However, the Lesbian is a very elusive creature. She burrows underground in her fear of identification. She is cautious in her associations. Current modes in hair style and casual attire have enabled her to camouflage her existence. She claims she does not need help. And she will not risk her tight little fist of security to aid those who do.

But surely the ground work has been well laid in the past 5 1/2 years. Homosexuality is not the dirty word it used to be. More and more people, professional and lay, are becoming aware of its meaning and implications. There is no longer so much "risk" in becoming associated with

And why not "belong"? Many heterosexuals do. Membership is open to anyone who is interested in the minority problems of the sexual variant and does not necessarily indicate one 's own sex preference.

Women have taken a beating through the centuries. It has been only in this 20th, through the courageous crusade of the Suffragettes and the influx of women into the business world, that woman has become an independent entity, an individual with the right to vote and the right to a job and economic security. But it took women with foresight and determination to attain this heritage which is now ours.

And what will be the lot of the future Lesbian? Fear? Scorn? This need not be-- IF lethargy is supplanted by an energized constructive program, if cowardice gives way to the solidarity of a cooperative front, if the "let Georgia do it" attitude is replaced by the realization of individual responsibility in thwarting the evils of ignorance, superstition, prejudice, and bigotry.

Nothing was over accomplished by hiding in a dark corner. Why not discard the hermitage for the heritage that awaits any red-blooded American woman who dares to claim it?


THE THEME IN THE IN THE THEATER...

Plenty of sympathy and good strong coffee are served up by Theatre Arts at 1725 Washington St. in their presentation of Robert Anderson's "Tea and Sympathy".

The plight of a sensitive boy in a New England private school who is accused of homosexuality is expertly and sympathetically portrayed to receptive audiences. But more than sympathy is the rapport felt between cast, story and audience--the ultimate of a production well staged.

Following the final curtain the audience is invited to join the company in an informal reception over "coffee".

Because the play has been so well received, the production will extend into October with performances Thursday, Friday and Sunday nights at 8:30 and twice on Saturday at 8:00 and 10:30.

This production should be on your "must" list. Don't miss it.

While the advertising and "titles" are most misleading and erroneous, the "Well of Loneliness" and/or "Pit of Loneliness", movie at the Cinema on Market St. is a rather good adaptation of the book, "Olivia", published in 1949 by William Sloane Associates. It is a French movie of a young girl's attachment to the head mistress of a finishing school.


"Maedchen in Uniform" (1931), a psychological study of a school girl's crush on her teacher. According to Coronet Adletter, "The theme of Lesbianism is handled with great poignancy, and the full blame for any abnormality is attributed to a system which deprives youth of its natural need of affection".

Readings for the Player's Ring production of "The Children's Hour" are still under way. This is the controversial play of a few years ago concerned with the repressed Lesbian relationship of two head-mistresses of a private school.

RAISING CHILDREN IN A DEVIANT RELATIONSHIP

This here to for untouched subject has been broached by members of the Daughters of Bilitis in several discussion sessions, one of which was led by Faith Rossiter, psychotherapist It is surprising to learn how many women are raising children in a deviant relationship (we have also learned of instances where men are undertaking this responsibility too).

To be of any assistance to those who are meeting this problem, we need more data and more research into the various facets of such a relationship. If you are interested or if you can help us in this project, please let us hear from you.

With the aid of a young woman from Philadelphia who has some 70 odd titles in her personal collection of fiction on the Lesbian theme, the Daughters of Bilitis are compiling a bibliography to be published in future issues of The Ladder.

Do you have any books in your collection that serve only the purpose of gathering dust? We want old books--any old books. Those on the homosexual theme will be added to the library now maintained in San Francisco. The others will be turned over to book dealers for credit on titles needed to round out the library collection. Because of lack of funds, the library is almost entirely dependent on your donations...

We need manuscripts (both fiction and nonfiction) by and about women to correct erroneous conceptions--to depict Lesbianism as it is not as is supposed.

In future issues a regular department for book reviews will be published in The Ladder.

Another subject we would like more information on concerns women whose families are aware of their deviate tendencies. So many of us question the advisability of telling the family. Can you help or advise?

The sentiments of the members of the Daughters of Bilitis can best be expressed by the following tribute published as a Letter to the Editor in the "San Francisco Examiner":

"...In the passing of Dr. Alfred Kinsey the world has lost an outstanding scientist and a champion of human freedom and happiness. The cause of enlightenment has suffered a grievous loss. The powers of darkness and superstition and the enemies of science may well rejoice.

"Kinsey's work will go on under the guidance of his able associates. Those on the side of human progress will wish them well.

"To paraphrase Churchill: Rarely have so many benefited so much by the work of one man. He truly gave his life to his work.

The Daughters of Bilitis is anxious to hear from any professional people desiring further information regarding our activities; from researchers planning projects on our subject, or with projects underway. We wish to cooperate in any way possible to further knowledge of the Lesbian.

I wish to join Daughters of Bilitis_____ 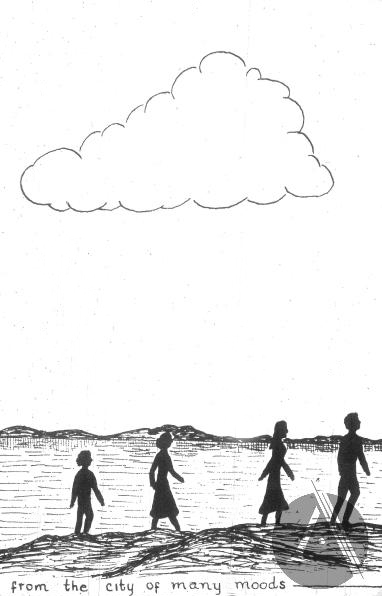