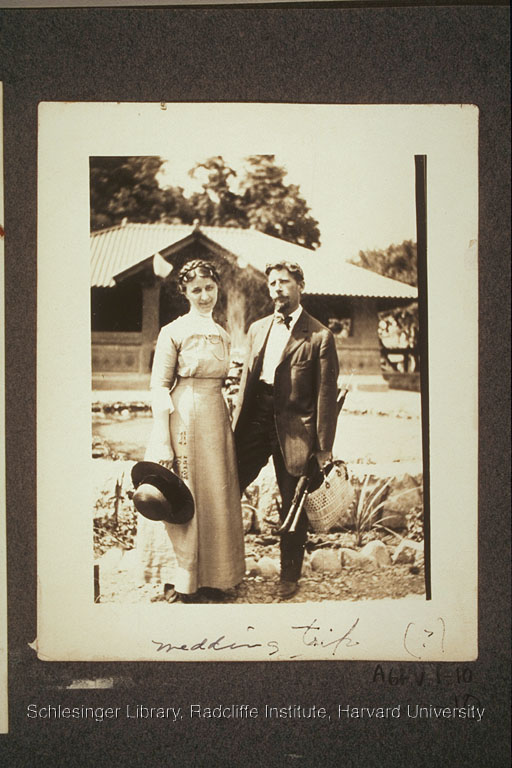 This news story, surviving among clippings that Florence Kitchelt saved, documents the importance of the settlement house movement as a work site for college-educated women, 1890-1930. Settlements made it possible for middle-class women to live collectively in poor immigrant neighborhoods and work on innovative projects that developed their talents in ways that would not be possible had they lived elsewhere. By 1910, Florence Cross had a decade of experience in that milieu and became an important intermediary between striking Italian workers and their employer, the city of Rochester.

ROCHESTER, N. Y., July 16-- More than 3,000 Italian laborers have been on strike for the last month in this city, and it is rumored that the leader, or the moving spirit of the strikers, Miss Florence Ledyard Cross, is a college woman, and while she disclaims the title of leader of the striking Italian laborers there is no doubt that she gave the workers valuable assistance, and is looked up to by them as their guardian angel. Through her Instrumentality the strike has been settled. There had been in all that time but one battle with the police.

Miss Cross, Secretary of the Bureau of Information and Protection for Foreigners, which was influential in securing the settlement of the recent strike of the street laborers, is a native of Rochester, and was graduated from Wells College in 1897, and immediately began work to better social conditions. She started in at the George Jr. Republic in the summer of 1898 in charge of the girls' housekeeping department, and from that she went to the college settlement on the lower east side at Rivington street, New York City, and then served as assistant head worker at the Lowell Home, a social settlement in New Haven, Conn., where she was first brought into close contact with Italians. From this section she was transferred to the Little Italy House in Brooklyn, which is the centre of a large Italian colony.

In 1907 she went to Italy and studied the Italians in their homes, and on her return took charge of a new work in Rochester, the practical housekeeping centre. Here the Italian women immigrants were taught housekeeping in the American style and aid was extended in other directions- to the sick and the oppressed.

The work attracted the attention of public spirited citizens and early in March of this year the Bureau of Information and Protection for Foreigners was established by private funds in modest offices in Frank street.

Here the poor and needy foreigner, or the immigrant who is friendless and unable to speak the English language, is given advice and assistance and guarded against designing men and women.

This bureau is not for the purpose of interfering with existing associations and institutions, but to amplify their work.

The Rochester bureau represents the North America Civic League for Immigrants, with headquarters in New York and Boston, and is doing a valuable work among thousands of people who are brought to the shores of America. All of the immigrant children coming to Rochester from Ellis Island are looked up when they reach this city and arrangements are made to get them into the public schools without delay.

Just a month ago the street laborers of Rochester, composed mainly of Italians and a few Poles, struck demanding 25 cents an hour instead of 21 cents an hour. In a few days the strikers became entangled with self-seeking promoters of the strike and matters looked dark. An agreement was reached by a self-appointed committee who dealt with the contractors but the agreement was repudiated by the strikers.

Then the Italians, remembering the great assistance given to their wives and children, went to Miss Cross for advice, and Miss Cross set about to bring the claims of the workers before the contractors in proper shape.

A meeting of public citizens comprising the membership of the bureau was held, and the strike leaders and members were closely questioned until the root of the matter was reached.

In the mean time Miss Cross had drawn up an agreement as a basis on which the strike might be settle which provided that the men go back to their work at the rate demanded, pending the settlement of the whole wage question by an arbitration committee. The contractors, incensed by the repudiation of the first agreement, refused to consider the basis of settlement. The bureau then appointed Rev. Edward J. Hanna, D.D., as a committee of one to act with Mayor Edgerton and Miss Cross to use every effort to bring about a settlement of the strike.

Late last week the strike was settled and the 3,000 Italians went back to their work at 22 cents an hour, a gain of only one cent per hour, but feeling satisfied that they had fought well for a principle. During the progress of the strike Miss Cross was treated with every consideration by the strikers, many of them rough and ignorant if not actually of the criminal class. She was known throughout the city as the "woman strike leader," and her work was watched, with great interest by men in the labor unions as well as by the contractors and capitalists.

Referring to the strike, Miss Cross said: "It is ridiculous to say that I am the leader of the strikers. I sympathized with the men and did all I could to assist them in placing their grievances before the public and the contractors in the proper way. I urged the men not to resort to violence to attain their ends and they controlled themselves splendidly. The work of the bureau is congenial to me. I believe the poor and the unfortunate foreigner should be assisted and instructed by American citizens instead of being hounded, maltreated, robbed, and persecuted and I have determined to give my life work to better the condition of all immigrants."