As the second phase of End of the Rainbow, Sisters of Survival (SOS) traveled to Europe in the spring of 1983. The group initially planned to do performances about nuclear disarmament in art venues but finding sponsors for the performances proved difficult, so the women created a public installation in front of a significant peace monument in each of the four countries they visited (England, Holland, Malta, and Germany, for a total of seven performances). The installation had several parts. The first component was artwork that SOS solicited from North American artists that addressed the nuclear threat. In each city, SOS did a public presentation of the artwork from North America and asked European artists for documentation of their artwork about the nuclear threat to take back to the United States.[78] Secondly, SOS asked antinuclear groups in the United States for a message they wanted to send about the nuclear threat to the people of Europe, which SOS translated into pictograms on flags to use in their performances. At each site, SOS networked with local organizations for peace or disarmament and asked them to create additional messages for the flags. The group created an installation at each location using flags hung on or around the monument. Dressed in their colored habits, SOS passed out brochures that translated the messages of the flags into four languages. Members of SOS continually signaled SOS in semaphore as they spoke with the public about the installation.

The image below depicts the installation at the Greenham Common Peace Encampment, which began with a protest in September 1981 at the Greenham Common U.S. Air Force base in Berkshire, England, where the first U.S. Cruise missiles were to be based. At first a temporary camp, this site soon became a permanent women-only peace camp that served as a symbol of women's resistance to what was seen at the male-dominated world of nuclear weapons. At its peak, 8,000 women lived in tents outside the base, demonstrating and committing acts of civil disobedience. The peace encampment at Greenham Commons lasted until 2000, when the land, which had been free of missiles since 1991, reverted from a military base. For more information about SOS's performance of End of the Rainbow in the United States, see Document 19A. 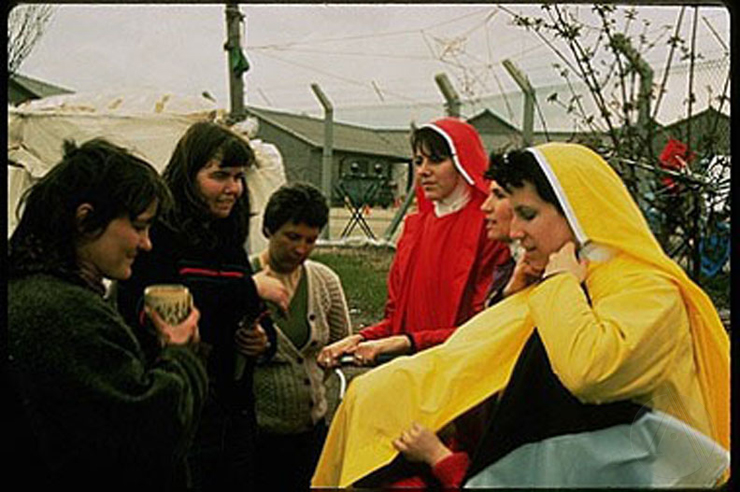