In early 1981, five members of the Woman's Building—Jerri Allyn, Nancy Angelo, Anne Gauldin, Cheri Gaulke, and Sue Maberry—began discussing their desire to form a new performance art group. When Cheri Gaulke saw a cover story in Time magazine on demonstrations against the nuclear arms race in Amsterdam that drew 300,000 people, the group found its cause. The women called their group Sisters of Survival (SOS), a name with multiple meanings. The acronym, SOS, is of course, the universal signal of distress, which they felt reflected the dire nuclear scenario. The usage of the term "sister" also referred to the nun's habit that the members adopted for their performances. The persona of the nun came from a performance character developed by Nancy Angelo. For Angelo, "being in a community of women was like being in an [religious] order in a sense, with a shared world view. "[74] That vision of a community of feminists reflected an idea popular in early 1970s feminism that was encapsulated in the slogan "Sisterhood is powerful."[75] However, by the late 1980s, the vision of a universal sisterhood had come under sharp criticism by feminists of color, who argued that in emphasizing gender solidarity, feminists had ignored the very real differences that existed among women. Thus, the members of Sisters of Survival wore habits of different colors as "a metaphor that difference would exist in the world. "[76]

End of the Rainbow was a three-year project. The first year, the group educated themselves about the issue of nuclear disarmament. They also participated in antinuclear activities in the United States. As their first art piece, SOS collaborated with sculptor Marguerite Elliot, another Woman's Building member, on a piece called Shovel Defense. Elliot had been struck by a political cartoon parodying a comment made by T. K. Jones, Reagan's Undersecretary of Defense, in the Los Angeles Times on 16 January 1982. When asked whether the United States could recover from a nuclear war, Jones advised citizens that they could survive if they dug a hole in the ground to hide in. In response, Paul Conrad, a Pulitzer Prize winning political cartoonist for the Los Angeles Times, drew a shovel graveyard titled "Reagan Administration's Plan for Civil Defense. "[77]

Elliot recreated the cartoon as a sculpture installation, attaching crosses to the handles of shovels, painting them white, and lining them up in rows as in a military graveyard. In the performance, the Sisters of Survival performed a dance of death in front of a banner that read "Civil Defense: A Grave Mistake." The piece received excellent press coverage when UPI picked up the picture. The group employed a clipping service to trace the national response to the piece. Although members were amazed at the variety of headlines that accompanied the picture of the installation, the message of the installation remained intact because of the banner in the background. For more about SOS's performance of End of the Rainbow, see Document 19B. 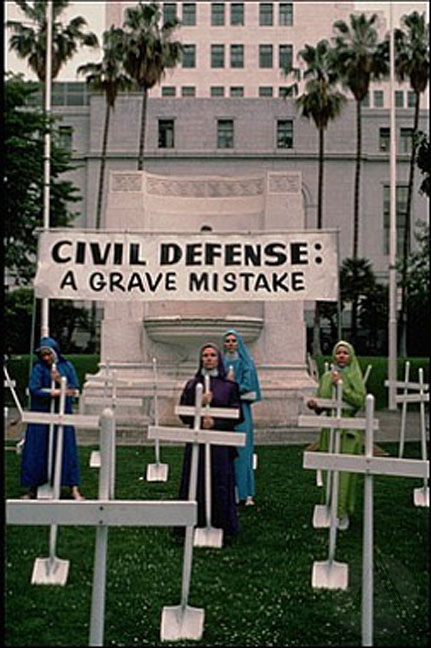