For years, lesbian artists at the Woman's Building dreamed of mounting a national exhibition of lesbian art. Lack of sufficient gallery space, financial constraints, and limited contact with lesbian artists across the nation hampered their efforts. In 1978, a group of six Los Angeles lesbians, led by Tyaga (Terry Platt), a former Feminist Studio Workshop student and an employee of the Gay and Lesbian Community Services Center in Los Angeles, committed to coordinating a show of lesbian art. The Great American Lesbian Art Show (GALAS) occurred in May 1980.[70] Women artists could participate in GALAS in one of three ways. The organizers hoped that individual women would organize lesbian art shows in their communities. They hoped to produce a national network of lesbian art rather than one show in one city. Women could also submit their work for potential inclusion in the GALAS Invitational, an exhibition of ten lesbian artists to be mounted at the Woman's Building. Finally, women were encouraged to send slides of their work for inclusion in a registry of lesbian art, a slide archive to be housed at the Woman's Building, the National Gay Archives in Los Angeles (now the ONE Institute and Archives), and the Lesbian Herstory Archives in New York. 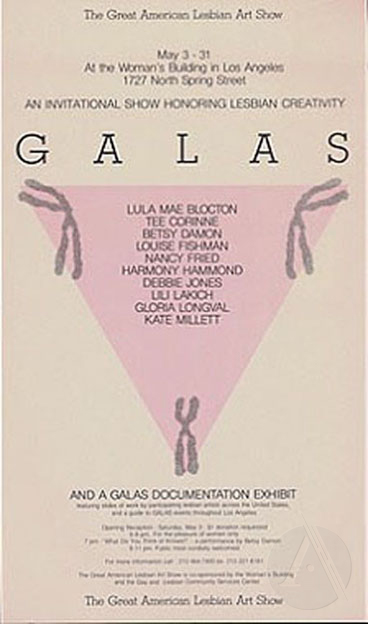 This poster advertising the Great American Lesbian Art Show played with several symbols associated with women and lesbians. The pink triangle in the center of the poster reflects the usage of this symbol to reference the vagina in ancient art. The triangle is flanked by three dancing Xs, a reference to the fact that the female chromosome marker looks like an X. Designed by Bia Lowe.