Document 13: Money created as props for Bill of Rights, a performance by the Feminist Art Workers endorsing support of the ERA, January 1980. The Woman's Building Digital Image Archive, The Woman's Building, Inc., available at http://www.womansbuilding.org.

Bill of Rights, first performed in January 1980, spoke to a pressing feminist issue, ratification of the Equal Rights Amendment. Controversy arose when the College Art Association decided to hold its 1980 conference in Louisiana, a state which had not ratified the ERA. A compromise was reached: the conference would be held in New Orleans but artists would be invited to mount protests.[69]

In Bill of Rights, the Feminist Art Workers dressed as members of various professions and distributed a different "bill" on each of the three successive days of the conference. A $5 bill, distributed on the first day, offered facts about women's employment and asked "What do you earn?" The next day, a $10 bill provided information about the wage gap and posed the query "What are you worth?" On the final day, a $20 bill provided information about the ERA and asked "What are you going to do about it?" The first two bills helped personalize the ERA debate for participants, while the final bill was designed to spur convention attendees to action. Bill of Rights proved so successful that the Feminist Art Workers repeated it several times over the next two years, and various groups used the piece in states that had not ratified the ERA. 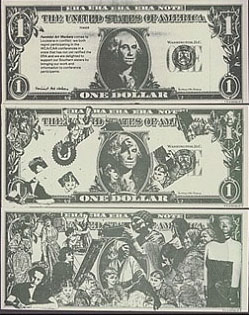 "Bills" that members of the Feminist Art Workers distributed to participants of the College Art Association in 1980 to raise awareness about ERA ratification. Graphics designed by Sue Maberry. Click on each bill for an enlarged image. 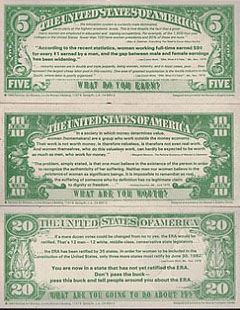 The three "bills" Feminist Art Workers distributed at the conference, asking "What do you earn?" "What are you worth?" and "What are you going to do about it?" Graphics designed by Sue Maberry. Click on each bill for an enlarged image.