The Feminist Art Workers first performed Heaven or Hell in June 1979 at the National Women's Studies Association meeting in Lawrence, Kansas, and subsequently repeated it at a variety of venues. The text of the promotional postcard that appears below explained the inspiration for the piece.

One of the most interesting aspects of Heaven or Hell is that the Feminist Art Workers conceived of this piece as a way to celebrate women supporting each other while simultaneously emphasizing that women should not nurture others at the expense of themselves. The image of feeding each other is a stark contrast to the image of a mother spooning food into an infant's waiting mouth. The Feminist Art Workers wanted to replace the idea of women as perpetual givers with one of women as both givers and takers. This reciprocity is necessary for a functioning community because without taking, the giver herself would be unable to continue as a strong member of the community. Another interesting aspect of this piece is that the three women pictured, Cheri Gaulke, Nancy Angelo, and Laurel Klick, appear as Amazons, a popular image in the women's movement in the 1970s that is most closely associated with lesbian feminism.[68] However, it was used also as a symbol of women's strength and an image of independence from men, which is how the Feminist Art Workers intended it. 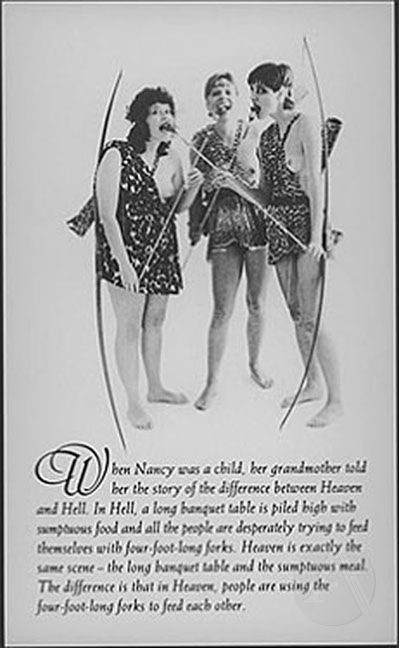 Transcription of the text of the postcard:

When Nancy was a child, her grandmother told her the story of the difference between Heaven and Hell. In Hell, a long banquet table is piled high with sumptuous food and all the people are desperately trying to feed themselves with four-foot-long forks. Heaven is exactly the same scene—the long banquet table and the sumptuous meal. The difference is that in Heaven, people are using the four-foot-long forks to feed each other.