The Waitress Goddess Diana was a performance art character Anne Gauldin developed with Denise Yarfitz. After visiting prehistoric sites in Europe in 1977 associated with ancient goddess worship, Gauldin became interested in using those symbols in her art work.[65] The Waitress Goddess Diana symbolized the ability of women to satisfy everyone's wants and needs.[66] Her costume, a many-breasted torso, derived from a well-known statue of Artemis that stood in her temple in Ephesus, where she was worshiped as a fertility symbol. In The Great Goddess Diana (ca. 1978), Gauldin and Yarfitz created an altar to Diana in a restaurant to honor "the great provider within each of us." A ritual incantation explained the piece:

"The Great Goddess Diana returns in Her symbolic form to the modern day place of sustenance—the restaurant. She reveals Herself as the sprit of nurturing within the female as waitress. Diana was a goddess worshiped thousands of years ago. Great many breasted Mother, ruler and nourisher of the animal kingdom, provider of sustenance both physical and spiritual for all creatures great and small. How could you stand it? Sweat of reaching hands, open mouths, empty bellies—questioning, commanding, demanding—you must give everything to everyone at once, or be devoured!"[67]

While many feminists in the 1970s sought to overcome women's role as provider, the Waitresses were also interested in honoring it while at the same time recognizing the strain placed on women who were expected to be everything to everyone. Interestingly, there is no expectation in this piece that only women fulfill this nurturing role, nor did the piece condone the idea that women should give of themselves until they having nothing left. Instead, they suggested that the provider exists within us all and offered the performance as a healing ritual. For more about The Waitresses' performance of Ready to Order, see Documents 11A and 11B. For the script of "The Great Goddess Diana," see Document 11D. 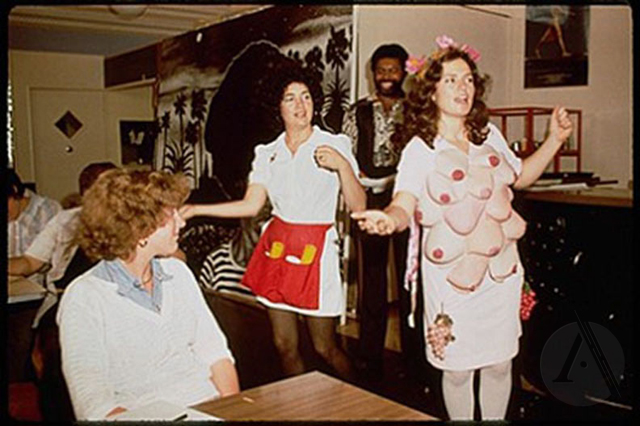 Ann Gauldin as the Waitress Goddess Diana in Ready to Order? a piece The Waitresses performed in restaurants in Los Angeles in 1978. Courtesy of Maria Karras.