Jamie Wildman, a member of The Waitresses, created the character of Wonder Waitress as a symbol for women's power. She played off the image of the comic-book heroine Wonder Woman, who enjoyed a resurgence of popularity due to the television series of the same name that ran from 1976 to 1979. In some pieces, Wonder Waitress swooped in to rescue her harried sister waitresses from harassing customers, rude managers, and abusive cooks. In others pieces, a seemingly normal waitress morphed into Wonder Waitress, à la Clark Kent transitioning into Superman, by ripping open her shirt to expose her Wonder Waitress uniform while declaring "This is a job for wonder waitress!" For more about The Waitresses' performance of Ready to Order? see Documents 11A, and 11C, and 11D. 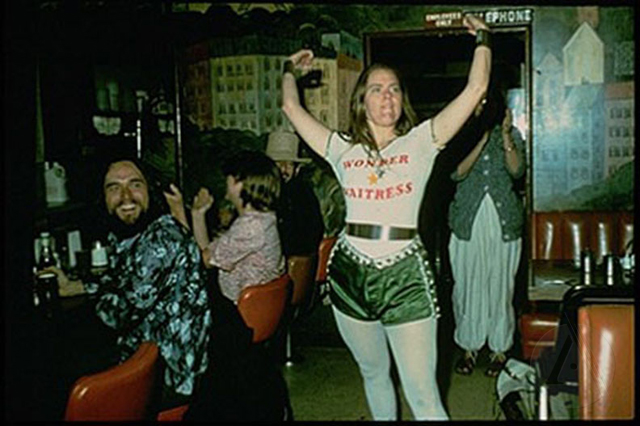 Jaime Wildman as Wonder Waitress in Ready to Order? a piece by The Waitresses performed in restaurants in Los Angeles in 1978. Courtesy of Maria Karras.