In August 1977, Woman's Building member Leslie Labowitz created Record Companies Drag Their Feet as publicity for a national boycott of record album covers that depicted images of violence against women. The boycott was organized by Woman Against Violence Against Women (WAVAW), a group founded by Julia London, who was a student of Suzanne Lacy at the Woman's Building. WAVAW grew out of feminist protests against the film Snuff, which portrayed the murder and mutilation of a woman as entertainment. Following an ad hoc protest action, a group formed that expanded its focus to images of women in popular culture, focusing on the depiction of acts of violence against women on record album covers. In 1976, WAVAW joined with the National Organization for Women to call for a boycott of these albums.

Record Companies Drag Their Feet took place at the base of a billboard on Sunset Boulevard advertising the album Love Gun by the band Kiss. Below it, Labowitz created an alternative billboard with statistics about rape. The performance piece involved depictions of women attempting to persuade record company executives to change the images on album covers. During the performance, women dressed as roosters, representing executives from major record labels, and strutted around while four additional women protesters bore placards about myths of rape. When the protesters entered, the roosters placed an X mark across each woman's body. While one woman tore off her X, the other women protesters attempted to convey their anger to the roosters but were ignored. Each woman then turned her placard around to display copies of offensive album covers. They wrote in red "This is a crime against women" across the album cover. The piece concluded when twelve women of different ages and ethnicities carried a banner reading "DON'T SUPPORT VIOLENCE AGAINST WOMEN—BOYCOTT" across the stage and encircled the three roosters.

Record Companies Drag Their Feet used a great deal of symbolic imagery. The recording industry executives were caricatured as roosters, a pun on the word "cock." This image referenced not only the phallic imagery that often appeared on the album covers but also the patriarchal power that condoned images of violence against women. The symbolic negation of women occurred in the piece when the red X was placed across the women's bodies. The protests of women were silenced when the roosters refused to listen. However, the piece countered the idea that women were passive victims. The female protesters deface the images on the album covers. One woman rejects her symbolic erasure by tearing off the red X. The power of the feminist community is represented by the group of women who entrap the roosters within the banner. 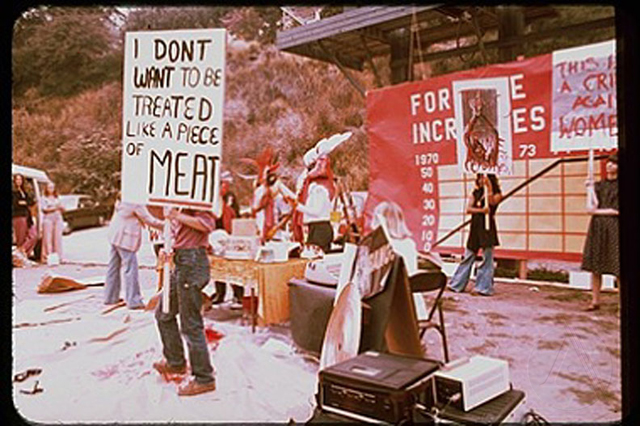