When the American Institute of Graphic Arts invited 100 designers to say something about color for an exhibition at the Whitney Museum, de Bretteville chose the color pink.[53] As she explained in an oral history interview, pink "is part of what women are assigned. If you have a female child, pink is the color that's assigned that. It's part of the re-naming of things…. [At that time] everyone who talked about women was talking 'our power, empowerment.' This was a different kind of power. This was the power of intuition of emotion, of connection, that I think is women's real, feminine power."[54] As would many other artworks at the Woman's Building, Pink sought to redefine and reclaim a traditional aspect of femininity, in this case the color pink.

The method de Bretteveille used for her piece signaled her commitment to feminism. She asked her peers at the Woman's Building to each contribute a four-inch by six-inch square of paper with her response or relationship to the color pink. This collaborative effort was a strategy derived from feminism, which emphasized the equality of women's contributions to the movement. Many of the contributions to Pink reflected the negative associations with the color pink, such as "Pink is childish. I'm not pink now," "SCRATCH PINK AND IT BLEEDS." Others reclaimed pink, as in the square ringed by the phrases "Pink is strong, Pink is Pink, Pink is not like anything, Pink is pink." The inclusion of viewpoints that contradicted de Bretteville's intent for the piece reflected her commitment to the collaborative ideal.

The form de Bretteville used also reflected feminism. The squares were organized in a grid, which mimicked a quilt top (see Document 3B). Feminist art historians and critics had begun to rehabilitate the quilt from its lowly status as a craft into a collaborative female art form.[55]

In addition to submitting her work to the prestigious exhibition for which it had been created, De Bretteville also put the broadsheet up in the streets of Los Angeles. Because de Bretteville always encouraged participation by the audience in her artwork, some pink squares remained blank so that viewers could include their thoughts about the relationship of women to the color pink. For a detailed view of six panels from Pink, see Document 3C. 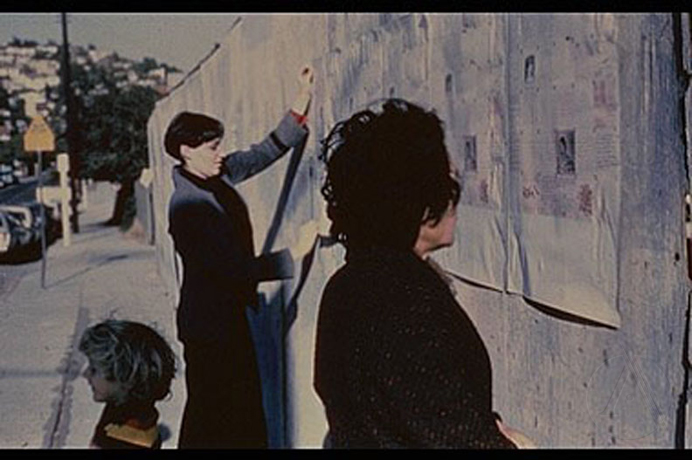 Sheila de Bretteville hanging up her Pink broadsheet in the streets, ca. 1974. Courtesy of Maria Karras.