Sheila de Bretteville initially designed the eyebolt pendant for her Feminist Studio Workshop co-teachers Arlene Raven and Judy Chicago. The image combined several aspects of feminism. First, the eyebolt mimicked the shape of the Greek symbol for woman, which was used often in the woman's movement of the 1970s:

Frequently, the image included a clenched fist in the middle of the circle:

De Bretteville purposefully omitted the fist to signify a strength that did not rely on violence. However, the eyebolt image functioned on another level. The necklace was made from an actual piece of construction material, reflecting the manual labor done by women to build the space that became the Woman's Building. De Bretteville, Chicago, and Raven believed that this physical labor was a way to overcome socialized ideas about gender that taught women that they were weak. On a third level, the eyebolt represented the manual labor skills that de Bretteville, Chicago and Raven believed would translate into useful skills for making art. Rather than encouraging students to specialize in a traditional medium such as painting or sculpture, the three teachers believed that students should first determine the content of an art piece and then select the most appropriate form of expression, which frequently meant the use of new art forms such as installations, book art, or performance. Students of the FSW found the eyebolt pendant so inspiring that they replicated it as a fund-raiser for the Woman's Building in 1978 and 1979. 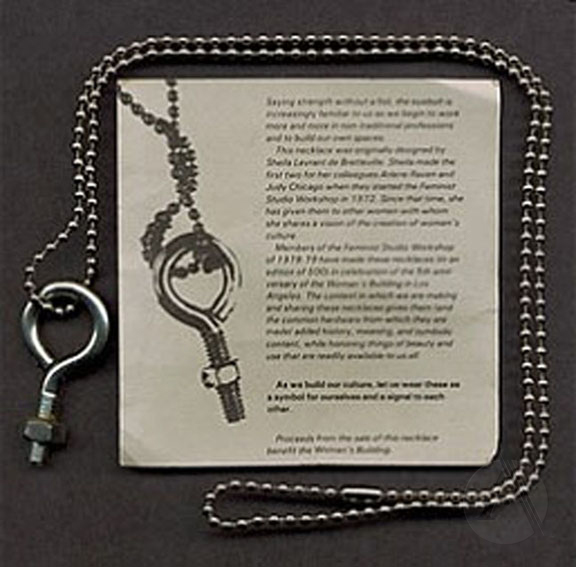 Eyebolt produced by members of the Feminist Studio Workshop to earn income for the Woman's Building. The necklace was originally designed by Sheila de Bretteville and given to her colleagues when they started the Feminist Studio Workshop in 1972. The eyebolt became an important symbol at the Woman's Building as a means of saying "strength without a fist." Courtesy of Maria Karras.

"Saying strength without a fist, the eyebolt is increasingly familiar to us as we begin to work more and more in non-traditional professions and build our own space.

This necklace was originally designed by Sheila Levrant de Bretteville. Sheila made the first one for her colleagues, Arlene Raven and Judy Chicago[,] when they started the Feminist Studio Workshop in 1972. Since that time, she has given them to other women with whom she shares a vision of the creation of women's culture.