In 1977, a group of former Feminist Studio Workshop students created The Waitresses based on discussions that emerged about their common experiences as waitresses.[64] They realized that the waitress was a trope for various female stereotypes: the nurturer, the servant, and the sex object. Furthermore, the status of waitresses cut across many feminist issues they wanted to address such as money, work, and sexual harassment. As their first piece, The Waitresses organized the performance art series Ready to Order?

The Waitresses decided to perform Ready to Order? as guerrilla theatre in various restaurants around Los Angeles. While the group obtained permission from the restaurants, the customers were unaware of the performances that would occur. The Waitresses drew heavily on humor and irony in their performances, which was appropriate to their guerrilla theater tactics, since audience members had not even consciously chosen to be members of an audience. The use of humor also fit with the group members' desire to provoke thought rather than place blame (see Documents 11B, 11C, and 11D).

Restaurants provided more than a thematically appropriate performance venue. The group consciously chose to offer their work in a public setting in order to establish a sense of unity among The Waitresses and other workers. The Waitresses were strongly committed to not only raising awareness among patrons of the economic issues faced by waitresses but also to reaching out to food service industry workers. Thus, The Waitresses organized panels and discussions with a variety of organizations that worked with food service employees. The text of the flyer included a translation of the events schedule in Spanish in an effort to reach as many food service workers as possible. 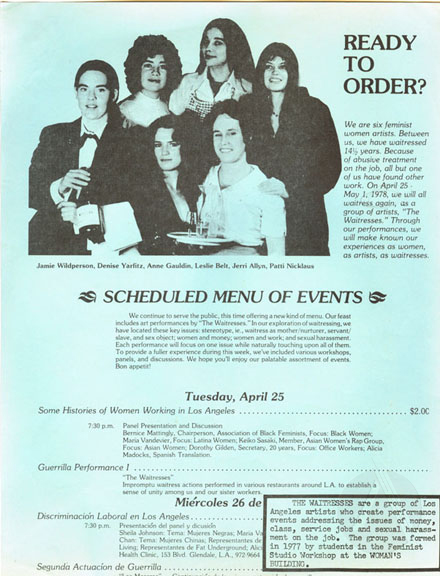