Over the span of eleven days in March 1975, the Woman's Building hosted five separate conferences: "Women in Design," 20-21 March; "Women's Words," 22-23 March; "Personal and Public Rituals: Women in Performance Art," 25-28 March; "Lady Finger/Mother Earth" (a women in ceramics conference), March 26; and "The Feminist Eye" (a film and video conference), 29-30 March. The explosion of activities encompassing such a broad range of the arts testified to the vibrant community that developed at the Woman's Building. The attendance by major luminaries of the women's movement at these conferences attested to the centrality of the Woman's Building in the feminist art movement. Because the organizers of these conferences were themselves among the major figures in the feminist art world, they were able to attract other well-known feminists as presenters. Authors Kate Millet, Jill Johnson, and Meridel le Sueur read their works at the "Women's Words" conference. Prominent performance artists such as Barbara Smith and Linda Montano performed at "Personal and Public Rituals: Women in Performance Art." Charlotte Bunch, best known at the time as a lesbian feminist activist, presented at "The Feminist Eye" film and video conference. While the ceramics and design conferences may not have drawn presenters that were as well known to the general public, their very existence reflected the breadth of artistic activities at the Woman's Building in its heyday. 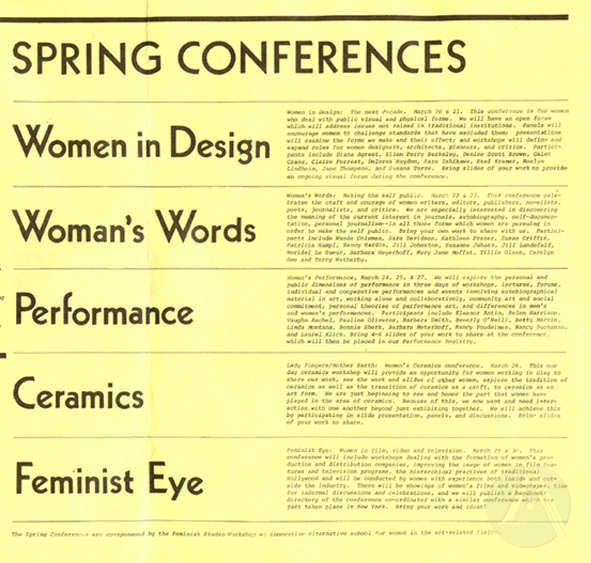 Advertisement for the five conferences at the Woman's Building in March 1975. The text of the conference descriptions is below.

Women in Design: The next decade, March 20 & 21. This conference is for women who deal with public visual and physical forms. We will have an open forum which will address issues not raised in traditional institutions. Panels will encourage women to challenge standards that have excluded them: presentations will examine the forms we make and their effect; and workshops will define and expand roles for women designers, architects, planners, and critics. Participants include Diana Agrest, Ellen Perry Berkeley, Denise Scott Brown, Galen Cranz, Claire Forrest, Delores Hayden, Sara Ishikawa, Etel Kramer, Roslyn Lindheim, Jane Thompson, and Susana Torre. Bring slides of your work to provide an ongoing visual forum during the conference.

Lady Fingers/Mother Earth: Women's Ceramics conference. March 26. This one day ceramics workshop will provide an opportunity for women working in clay to share our work, see the work and slides of other women, explore the tradition of ceramics as well as the transition of ceramics as a craft, to ceramics as an art form. We are just beginning to see and honor the part that women have played in the area of ceramics. Because of this, we now want and need interaction with one another beyond just exhibiting together. We will achieve this by participating in slide presentation, panels, and discussions. Bring slides of your work to share.

Feminist Eye: Women in film, video and television. March 29 & 30. This conference will include workshops dealing with the formation of women's production and distribution companies, improving the image of women in film features and television programs, the hierarchical practives of traditional tures and television programs, the hierarchical practives of traditional Hollywood and will be conducted by women with experience both inside and outside the industry. There will be showings of women's films and videotapes, time for informal discussions and celebrations, and we will publish a handbook/ directory of the conference co-ordinated with a similar conference which has just taken place in New York. Bring your work and ideas!

The Spring Conferences are co-sponsored by the Feminist Studio Workshop an innovative alternative school for women in the art-related fields.