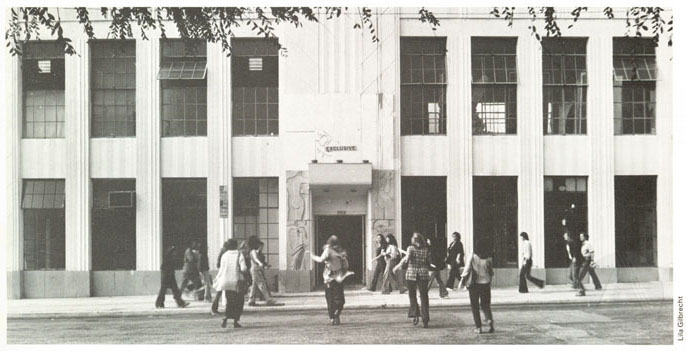 In the May 2001 issue of the Monthly Review, Barbara Epstein posed the question "What Happened to the Women's Movement?"[2] Epstein's article, although it was sympathetic to the movement, was only the latest in a long string of publications that probed the purported demise of organized feminism in the United States.[3] She concluded that feminism faltered as a movement and became just another liberal perspective in the 1980s, and was troubled by what she perceived as the silence of feminists about the causes of the decline of the movement. Responses to Epstein by Hester Eisenstein and Joan Acker, who, like Epstein, are both scholars of and participants in the movement of the 1970s, appeared in the same issue of the Monthly Review. Eisenstein and Acker disagreed with Epstein's assessment of the feminist movement. Both of them focused on the future of feminism and wrote extensively about possible directions a revived movement might take. Nevertheless, Acker wrote of "the daunting reality facing revolutionary visions, the strength of opposition to women's equality with men, and changes in economic and political relations that now seem to require new visions and ways of organizing."[4]

While Eisenstein and Acker's focus on the future of feminism is understandable, I find myself pondering what lessons could be gleaned from the past as we seek to understand what happened to the women's movement. Two things struck me as I read Epstein's article: one, that there were organized feminists throughout the 1980s; and two, that we need to look at these groups if we are to fully understand the history of the women's movement. This document project explores organized feminism in the 1980s by looking at the Woman's Building in Los Angeles, California. The Woman's Building was a physical space that during its long history consisted of businesses, activists, and artists, all bound by a common commitment to feminism. The name itself, however, became synonymous with a group of feminist artists who emerged from the central group, the Feminist Studio Workshop. While art historians have done an admirable job of exploring the aesthetic works of artists associated with the Woman's Building, it was as much a product of feminist activism in the 1970s as it was of the art world,[5] and it must be understood within the historiography of the women's movement.[6] Although a few other radical feminist groups used art to explore feminist issues, most notably the Redstocking Artists and the Chicago Women's Liberation Union Graphics Collective, most histories of the women's movement have focused on feminists who used more conventional forms of activism.[7] The history of the Woman's Building offers an opportunity to investigate the response of feminists to the challenges of the 1980s.

The origins of the Woman's Building lay in the first feminist art program in the United States, founded by artist Judy Chicago at California State University, Fresno, in 1970.[8] Although the Fresno Woman's Program proved very successful, Chicago was unhappy and moved to the California Institute of the Arts (Cal Arts) the next year to share teaching responsibility with artist Miriam Schapiro. Despite the move, Chicago remained dissatisfied with the limits placed on her feminist pedagogy within an institution that she viewed as male dominated. Along with two other Cal Arts faculty members, Arlene Raven, an art historian, and Sheila de Bretteville, a graphic artist, Chicago created the Feminist Studio Workshop (FSW), an independent feminist art program. A letter of invitation to prospective students described the women's initial vision for the FSW and reflected the connection the founders felt to the larger women's movement (see Document 1). The FSW faculty joined with other members of Los Angeles feminist community in the fall of 1973 to found the Woman's Building.[9] The group (and the building) took its name from the Woman's Building of the 1893 Chicago World's Fair and was intended to signal a connection to that institution.[10] Like its nineteenth-century predecessor, the Woman's Building both showcased art by women and drew attention to women as professional artists, a role that is typically gendered male in Western society.

In the early 1970s, feminist art activism blossomed across the United States, but the characteristics of the movement differed dramatically on the two coasts.[11] During the postwar era, New York became the center of the Western art world, and women artists there focused on gaining access to it. They founded parallel institutions to those of the contemporary art world such as cooperative galleries and feminist art journals and mounted countless protests against sexism within the art establishment. In contrast, their sisters in Los Angeles focused on creating a separate feminist art community.[12] This split in the feminist art movement mirrored a division in the larger women's movement.[13] The New York feminist artists assumed a stance similar to the "politicos" of the women's movement who remained involved with the traditional political arenas of the New Left even as they organized women's groups. The ideas expressed by the Los Angeles women artists fall closer to the sentiments of the radical feminists in the women's movement, who separated from their male political peers in an effort to explore the political dimensions of women's experience.

In addition to combating negative gender stereotypes, students in the FSW explored the impact of patriarchy and sexism on their lives. As in other groups in the women's movement, this process occurred through consciousness-raising, which brought small groups of women together to discuss and analyze their lives so that they could see that their problems were not just personal but part of the systematic oppression of women as a group. Women who wished to become artists had to confront the idea that women had no experiences from which to create great art.[18] Consciousness-raising thus had an additional function at the Woman's Building as the insights derived from it were translated into content for artwork. Sheila de Bretteville's broadsheet Pink is an excellent example of a feminist reinterpretation of one of the traditional aspects of femininity, the color pink (see Documents 3A-C).

An innovative approach to art-making gave rise to an exhilarating fusion of feminism and art at the Woman's Building. By the mid-1970s, the Woman's Building was firmly established with one foot in the women's movement and the other in the art world, which remained fascinated with, if not always impressed by, the Woman's Building. The range of activities that occurred during this time period reflected these two worlds. In many respects, the calendar of the Woman's Building was filled with the same types of events that occurred in women's movement organizations across the country. Luminaries of the women's movement, including Jill Johnston, Charlotte Bunch, Rita Mae Brown, Kate Millett, Alice Walker, and Audre Lorde, spoke at the Building. Feminist musicians Meg Christian, Holly Near, Margi Adam, and Cris Williamson appeared in concert. Women socialized in the coffee house, shopped in the thrift store, and attended dances on the weekends. At the same time, the Woman's Building provided a community for women who identified as artists, and it became a prominent exhibition site for nationally known feminist artists. Women studied feminist art-making full-time at the FSW,

The vitality of the Woman's Building during the mid-1970s also gave rise to some of its best-known artistic productions, the most prominent of which were collaborative performance art groups.[21] The Feminist Art Workers, formed in the fall of 1976, were a group of former FSW students who created art based on FSW pedagogy to share with the women's movement (see Documents 10, 12, and 13). Between 1977 and 1978, Suzanne Labowitz and Leslie Labowitz developed a feminist media and a feminist organizational strategy in a series of art pieces that addressed the issue of violence against women (see Documents 5, 8, and 10). The Waitresses used humor and irony to highlight the value of women's work through performance pieces that took place in various public venues (see Documents 11A-D). The variety of topics these groups covered illustrated the wide-ranging feminist interests of the Woman's Building members during this period, while their collaborative strategies illustrated their indebtedness to the women's movement.