Skip to main content
Women and Social Movements » Documents
How Did Catholic Women Participate in the Rebirth of American Feminism? 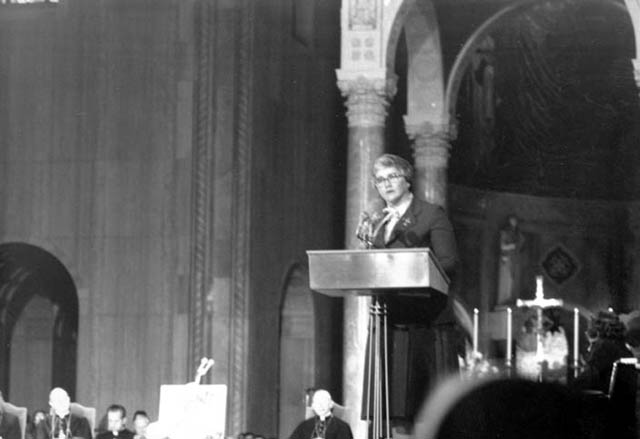 Sister Theresa Kane welcomes Pope John Paul II to the United States on behalf of the nation's women religious. Kane's call for the opening of all ministries to women caused controversy among Catholics around the world.

In October 1979, Pope John Paul II made his first visit to the United States. Theresa Kane, a Sister of Mercy and head of the Leadership Conference of Women Religious, the national organization for congregational leaders, was chosen to deliver a brief welcome when he addressed a gathering of women religious at the Shrine of the Immaculate Conception in Washington, D.C.  Kane's welcome was respectful, prayerful, and kind -- and it was also the most significant act of public defiance in the history of American Catholic feminism. On live, national television, Kane asked John Paul II to open all of the church's ministries to women. What made this statement so audacious was that the Pope had repeated his opposition to women's ordination before an audience of seminarians the previous day. After her speech, Kane spontaneously knelt before the pontiff for his blessing, a move some considered an act of submission, and others an act of graciousness. Theresa Kane's welcome made headlines around the world, but more importantly, it was a cause for celebration for a movement in which victories were rare.

In the name of the women religious gathered in this Shrine dedicated to Mary, I greet you, Your Holiness Pope John Paul II. It is an honor, a privilege and an awesome responsibility to express in a few moments the sentiments of women present at this shrine dedicated to Mary the Patronness of the United States and the Mother of all humankind. It is appropriate that a woman's voice be heard in this shrine and I call upon Mary to direct what is in my heart and on my lips during these moments of greeting.

I welcome you sincerely; I extend greetings of profound respect, esteem and affection from women religious throughout this country. With the sentiments experienced by Elizabeth when visited by Mary, our hearts too leap with joy as we welcome you — you who have been called the Pope of the people. As I welcome you today, I am mindful of the countless number of women religious who have dedicated their lives to the church in this country in the past. The lives of many valiant women who were the catalysts of growth for the United States Church continue to serve as heroines of inspiration to us as we too struggle to be women of courage and hope during these times.

Women religious in the United States entered into the renewal efforts in an obedient response to the call of Vatican II. We have experienced both joy and suffering in our efforts. As a result of such renewal women religious approach the next decade with a renewed identity and a deep sense of our responsibilities to, with and in the church.

Your Holiness, the women of this country have been inspired by your spirit of courage. We thank you for exemplifying such courage in speaking to us so directly about our responsibilities to the poor and oppressed throughout the world. We who live in the United States, one of the wealthiest nations of the earth, need to become ever more conscious of the suffering that is present among so many of our brothers and sisters, recognizing that systemic injustices are serious moral and social issues that need to be confronted courageously. We pledge ourselves in solidarity with you in your efforts to respond to the cry of the poor.

As I share this privileged moment with you, Your Holiness, I urge you to be mindful of the intense suffering and pain which is part of the life of many women in these United States. I call upon you to listen with compassion and to hear the call of women who comprise half of humankind. As women we have heard the powerful messages of our Church addressing the dignity and reverence for all persons. As women we have pondered upon these words. Our contemplation leads us to state that the Church in its struggle to be faithful to its call for reverence and dignity for all persons must respond by providing the possibility of women as persons being included in all ministries of our Church. I urge you, Your Holiness, to be open to and respond to the voices coming from the women of this country who are desirous of serving in and through the Church as fully participating members.

Finally, I assure you, Pope John Paul, of the prayers, support and fidelity of the women religious in this country as you continue to challenge us to be women of holiness for the sake of the Kingdom. With these few words from the joyous, hope-filled prayer, the Magnificat, we call upon Mary to be your continued source of inspiration, courage and hope: "May your whole being proclaim and magnify the Lord; may your spirit always rejoice in God your Saviour; the Lord who is mighty has done great things for you; Holy is God's Name."