AASC's first informational brochure alternated between practical advice for sexually harassed women and a far-reaching critique of United States culture and its capitalist economic system. AASC argued that sexual harassment was a form of violence against women that reflected and reinforced women's subordinate status in society. AASC asserted that violence against women, described as a "highly effective tool of social control," resulted from "our country's history of relying upon violence as a method of problem solving" and from the fact that "men are socialized to dominate women through the use and threat of violent behavior." They argued that men sexually harass women whom they see as threats to their masculinity, power, or economic status. Furthermore, both the unequal status of workers and employers as well as the unequal status of men and women reinforced each other in cases of sexual harassment. They argued, "Sexist attitudes, along with racist and classist beliefs, are vital parts of the U.S. economic system. Not until an egalitarian and democratic work structure is established will sexual harassment be eradicated." They described women's economic vulnerability in the labor force, their long history of sexual harassment in the United States, and the psychological effects of sexual harassment. This brochure is an example of how early feminists working on sexual harassment linked sexism, racism, and classism, and identified sexual harassment as an important tool for the enforcement of these systems of dominance. 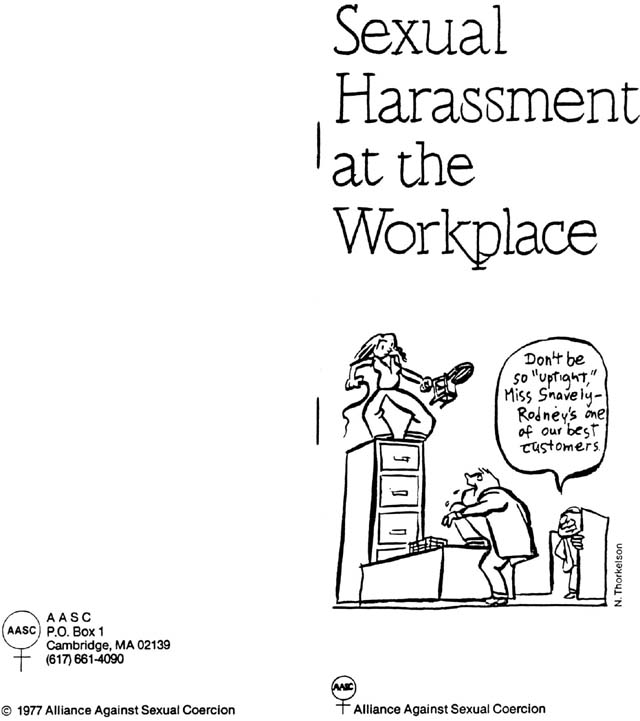 Printing costs for this brochure were provided by a Women & Work Small Grant from the Center for Research on Women in Higher Education and the Professions, Wellesley College, Wellesley, Massachusetts.

Neither the Center nor the College are responsible for the ideas expressed herein.

This brochure was developed and written by Rags Brophy, Mary Bularzik, Martha Hooven, Freada Klein, Liz Cohn-Stuntz and Lynn Wehrli. We would like to thank Rochelle Lefkowitz and Constance Enzweller for their assistance.