Skip to main content
Women and Social Movements »
Pacifism vs. Patriotism in Women's Organizations in the 1920s: How Was the Debate Shaped by the Expansion of the American Military?

Pacifism vs. Patriotism in Women's Organizations in the 1920s:
How Was the Debate Shaped by the Expansion of the American Military? 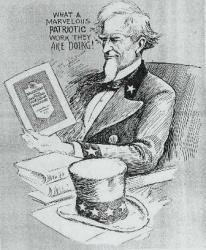 Political Cartoon appearing in The Daughters of the
American Revolution Magazine, December 1924

The years following World War I served as a crucial turning point in American diplomatic and military policy. Prior to the war the United States had cultivated a policy of "isolationism" in international affairs. While the nation had developed an "informal" empire in the Philippines, Hawaii, Latin America, and the Caribbean, and consequently built up a naval force to protect its commercial interests there, policy makers had remained aloof from the alliances and conflicts that plagued Europe.[1] When Europe erupted in war in 1914, American leaders resisted direct involvement until a convergence of forces finally committed the U.S. to the Allied war effort in 1917.[2]

Many individuals protested against American involvement in the war, among them the women of the Woman's Peace Party (WPP). Organized in 1915 and led by reformer Jane Addams, the WPP sought to bring about a quick and peaceful resolution to the war through mediation and dialogue among the powers involved. Addams and other Peace Party members joined with like-minded women from across Europe at an International Congress of Women at The Hague, Netherlands, in 1915.[A] The Women's International League for Peace and Freedom (WILPF), a united effort of women from all nations to combat the forces that caused international conflict and war, arose out of this meeting.[3]

While the women of WILPF approached the war from a pacifist perspective, other American women saw a more immediate need to guarantee American victory against the "German menace." The national society of the Daughters of the American Revolution (DAR), among others, sought to answer this need by purchasing war bonds, donating funds to relief charities, and providing items such as knitted vests and wristlets to sailors overseas. By becoming involved in this type of political activity, the Daughters stepped beyond their organization's traditional purpose.

Founded in 1891, the DAR was the female counterpart to numerous male patriotic societies that sprang up in the 1890s.[4] The Daughters had previously refrained from purely political activities, instead devoting themselves to promoting patriotic celebrations and erecting monuments and markers to honor Revolutionary forefathers. War work provided DAR members with a new outlet for their energies and the organization's leaders took great pleasure in the enhanced recognition they received for aiding their country in its time of need.

Although WILPF and the DAR did not see eye-to-eye on the best response to the problems of World War I, both organizations were too involved in their own work to take much notice of each other. Occasional articles in The Daughters of the American Revolution Magazine, the organization's official publication, spoke out against pacifists, whom they saw as unpatriotic, but most issues during the war years were devoted to glorifying the DAR's war work or to promoting various aspects of military preparedness. Numerous articles explained the efficiency of the War Department, detailed the virtues of chemical warfare, and urged D.A.R. women to participate in civilian training camps.[5]

The end of the war generated a different political climate, which increased antagonisms between "patriots" and "pacifists." In 1919 a vicious Red Scare erupted in the nation, fueled in part by the 1917 Bolshevik Revolution in Russia. During 1919 and 1920 red baiters attached labels to peace organizations and their leaders, identifications which persisted for the next decade. At best pacifists were called dupes of Communism and Socialism, misled by their sincere desire for peace. At worst, peace leaders were vilified as Bolsheviks who sought to destroy the nation through disarmament and world revolution.[6]

Among the most extreme of the documents which "exposed" the communist threat to America was the New York State Legislature's Report on Seditious Activities, also known as the Lusk report. Although the report and its writers were soon discredited, patriotic societies adopted the report as a kind of handbook for identifying subversives. Attacks on peace advocates increased after the Lusk report's allegation that the "pacifist movement has been exploited to inject Socialism and internationalist ideas among the educated classes."[7] Members of patriotic societies believed the threat to be real. They answered the report's urging for "the loyal and courageous co-operation of the citizens of this Republic" to confront the problem.[8]

While the DAR participated in the red baiting of the period, they did not confront their political opponents directly. Attacks usually took the form of general denunciations of pacifism and its adherents in the pages of the Magazine. This uneasy coexistence did not last long, however. By the middle of the 1920s the Daughters had launched personal attacks on the leaders of peace organizations, charging them with a variety of un-American activities.

The documents in this collection examine the battle between pacifists and patriots in the 1920s. They express the beliefs of the two women's groups regarding the presence of the military in American politics and diplomacy. Many documents revolve around conflict, either between the DAR and the WILPF, or within the DAR itself. Nearly all of the documents profess a desire for peace, yet their authors disagreed on the best means to that end. At the center of this issue is the question of disarmament. The collection begins with statements from both groups concerning the 1921-1922 Washington Armament Limitation Conference, and concludes with an article published after the 1930 London Naval Limitation Conference. The intervening documents depict the dialogue between peace advocates and patriots about American womanhood, politics, diplomacy, and militarism during the 1920s.

A. For more information on the International Congress of Women and the subsequent peace mission, please visit the following editorial project on the Women and Social Movements website: How Did Women Activists Promote Peace in Their 1915 Tour of Warring European Capitals?
Back to Text