As the execution date set by the second round of convictions of Scottsboro defendants neared, the call to mass action intensified. The International Labor Defense (I.L.D.) appealed to the "People of Harlem! Negro and white!" to take to the streets on October 20th in mass action to force a review of the case by and appeal before the U.S. Supreme Court. At that rally, Ruby Bates and Lester Carter appeared along with officials from the League of Struggle for Negro Rights, the Upper Harlem Unemployed Councils, the Communist Party's Harlem Section and the I.L.D., which was also now fighting for its place as the main coordinator of the Scottsboro Boys' defense. 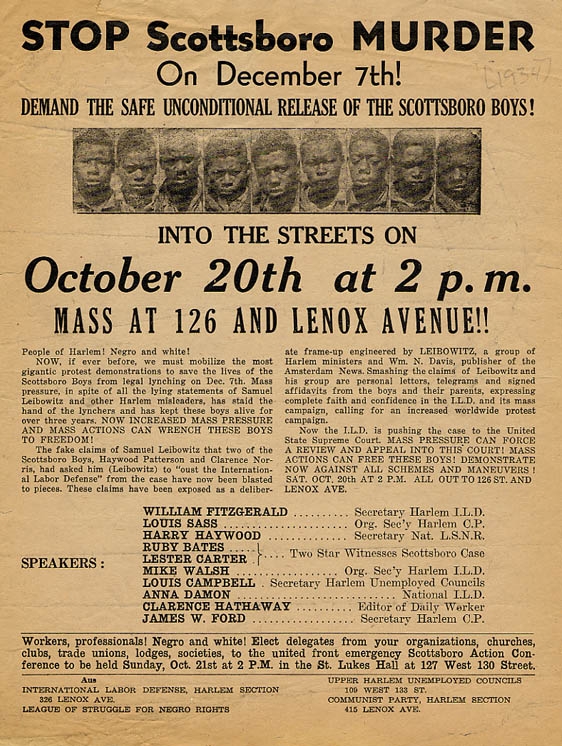 DEMAND THE SAFE UNCONDITIONAL RELEASE OF THE SCOTTSBORO BOYS!

INTO THE STREETS ON

People of Harlem! Negro and white!

NOW, if ever before, we must mobilize the most gigantic protest demonstrations to save the lives of the Scottsboro Boys from legal lynching on Dec. 7th. Mass Pressure, in spite of all the lying statements of Samuel Leibowitz and other Harlem misleaders, has staid the hand of the lynchers and has kept these boys alive for over three years. NOW INCREASED MASS PRESSURE AND MASS ACTIONS CAN WRENCH THESE BOYS TO FREEDOM!

The fake claims of Samuel Leibowitz that two of the Scottsboro Boys, Haywood Patterson and Clarence Norris, had asked him (Leibowitz) to "oust the International Labor Defense" from the case have now been blasted to pieces. These claims have been exposed as a deliberate frame-up engineered by LEIBOWITZ, a group of Harlem ministers and Wm. N. Davis, publisher of the Amsterdam News. Smashing the claims of Leibowitz and his group are personal letters, telegrams and signed affidavits from the boys and their parents, expressing complete faith and confidence in the I.L.D. and its mass campaign, calling for an increased worldwide protest campaign.

Now the I.L.D. is pushing the case to the United States Supreme Court. MASS PRESSURE CAN FORCE A REVIEW AND APPEAL INTO THIS COURT! MASS ACTIONS CAN FREE THESE BOYS! DEMONSTRATE NOW AGAINST ALL SCHEMES AND MANEUVERS! SAT. OCT. 20th AT 2 P.M. ALL OUT TO 126 ST. AND LENOX AVE.