The Chinese Digest was a monthly news magazine edited by second-generation Chinese Americans. The magazine covered San Francisco Chinatown in a regular feature, "Chinatownia." Its articles covered economic, social, and political news of interest to Chinese and Chinese Americans, and prior to the strike, the magazine covered the Chinatown garment industry, as evident in the reply to one editorial submitted to the paper by Jennie Matyas of the ILGWU (see Document 3). Since the Digest published only in English, the immigrant generation probably did not comprise a large portion of its readership, and given the small number of second-generation Chinese Americans living in the U.S., it most likely had a very limited circulation. The Digest folded in 1940, unable to make itself a self-supporting operation. Still, in its brief life it provided extensive coverage of Chinese affairs in California. 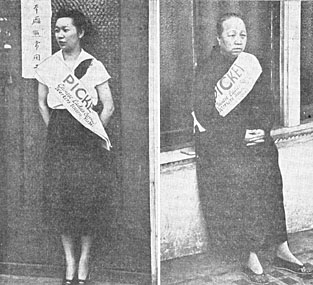 TWO GENERATIONS, BUT ONE PURPOSE—PICKETING

Among the 159 or so women garment factory workers who recently called a strike for higher wages and guarantee of steady work are young and older women of Chinatown's immigrant and American-born generations. Of these, scores have been put on picketing duty while their union and their employers negotiate for settlement of the strike. The above picture shows two of these pickets, the one on the left being American-born and typically American in dress and coiffure, while the woman on the right is typical of the older generation, from her Chinese slippers and earrings, to the way she has her hair fixed. (Read story of the strike on this page.)

(Editor's Note:--The first organized, large scale labor strike between Chinatown workers and Chinatown employers occurred here recently, a fact which is history making in the life of the Chinese in America. On the morning of Feb. 26, 1938, the newly organized Chinese Ladies Garment Workers, an affiliate of the International Ladies Garment Workers' union, declared a strike against Chinatown's largest garment factory at 720 Washington street, and pickets of the Chinese local were thrown around the place. At the same time picket lines were also thrown around three units of the National Dollar Stores, a chain dry-goods firm with two score branches in several states, in this city. Employees of the Dollar Stores, who were members of the Retail Clerks' union, refused to pass the picket lines, and the three stores as well as the factory all suspended operation.

(In order to secure the pro and con views on this situation, spokesmen of the parties concerned were requested by the Chinese Digest to state their positions in this labor dispute. The following statements from the National Dollar Stores, Ltd., the Golden Gate Manufacturing company, and the Chinese Local No. 341 of the I.L.G.W.U. are authorized for exclusive publication in this journal. These statements are herein released for the first time and the parties involved may now read each other's views. These statements have been secured for publication here in the interests of frank and impartial discussion.

(The importance of this present labor dispute may be gauged by the fact that the livelihood of several hundred Chinese workers and their families is being jeopardized. Unless the matter is settled soon, it will have immense adverse effects on the Chinese community's economic life.)

The National Dollar Stores, Ltd., chain store operators, operating their stores and a warehouse in San Francisco, was forced to close three units as a result of a picket line that has been established by members of the International Ladies Garment Workers' union, an affiliate of the C.I.O., although all of the stores and warehouse workers are members of the Retail Clerks union, Local 1100.

There was no deception practiced by the National Dollar Stores since the union was advised of these pending negotiations and the final sale of Feb. 8, 1938.

An impasse having been reached between the union and the National Dollar Stores, the union resumed negotiations with the Golden Gate Manufacturing Co. and demanded a guarantee to the union that it would employ the workers in the factory for not less than eleven months during the next calendar year and in order to insure performance of this agreement the union demanded a guarantee deposit of $10,000. To such a demand the Golden Gate Manufacturing Co. refused to yield.

All of the pickets marching up and down in front of the stores inform passersby that the National Dollar Stores is the owner of the factory, when the fact is that it is not.

The Golden Gate Manufacturing company was organized in the early part of February, 1938, with G.N. Wong, as president, Hoo Joe Sun as vice president and treasurer, Wong Goon Dick, Ng Doon Foon, Albert K. Chow, and others as directors. This was registered in February, 1938, with the Secretary of State of California as a corporation to do business in the state as a manufacturer of ladies' wearing apparel and to sell directly to retailers.

The company bought the factory at 720 Washington St., from the National Dollar Stores, Ltd., and continued to operate the factory and conduct normal operations without ceasing since the purchase. On Feb. 26, 1938, at 8 a.m. the Chinese Ladies Garment Workers' union, an affiliate of the I.L.G.W.U., declared a strike and picketed our factory.

Since the purchase of the factory the company has always been willing to negotiate with the Chinese Ladies Garment union, and we have no disputes with any of our employees.

The Chinese Local of the I.L.G.W.U. (Statement)

The Chinese Ladies Garment Workers' union welcomes the kind offer of the Chinese Consolidated Benevolent association (Chinese Six Companies) to lend its good offices in an attempt to solve the labor dispute between the National Dollar Stores, the socalled Golden Gate Manufacturing Co., and the workers now on strike for living conditions. We are eager as is the Chinese Consolidated Benevolent association for an amicable and just settlement.

The main issue at stake in this strike is whether the workers of Chinatown are to be supplied with work, or whether they are to be deprived of their livelihood.

In the hope of reaching some sort of satisfactory agreement without a strike, the union however did meet with the Golden Gate, in spite of the fact that we were convinced that they were not the real owners. From the Golden Gate Manufacturing company we demanded that we must have some sort of guarantee that the workers will be kept working. We asked for an eleven months' guarantee, and for a cash security, since by their own admission, the firm was not one that had financial capacity to guarantee a continued period of employment.

The attorney for the Golden Gate agreed with us that the principle of time guarantee was a practical and sound one economically, but he did not see how the Golden Gate could guarantee that amount of time. He suggested that he would, however, work out some form of aggregate hour guarantee and submit it to the firm with his recommendation. At this meeting, on Feb. 24, our representative agreed to relinquish any request for cash security.

We told the firm--in fact, we told both firms, that so far as wages were concerned, the Union would be very pleased to consider a compromise.

At no time did we have any offer from the firm to meet any of the workers' demands for a better living! On the contrary, the firm resorted to what all decent citizens should resent, it resorted to a so-called sale of its factory! The National Dollar "sold" its factory to whom? Joe Sun, the factory foreman, and G.N. Wong, the National Dollar Stores manager suddenly blossomed out as the new "owners"!

We reiterate: The problem at issue is one of guarantee that work will remain in Chinatown. The union supports the workers in this fair demand to the full. The strike will remain as long as necessary to obtain the protection that the Chinese people must have for their very lives! The union will be glad to compromise on wages. But the National Dollar insists that it wants to be free to buy elsewhere before supplying the Chinese workers with work, as a disciplinary measure because the Chinese workers joined a union for collective bargaining.

(A restraining order was granted to the National Dollar Stores on March 19, 1938, by the Superior Court at San Francisco, and the picket lines were removed from the three National Dollar stores, while picketing is being continued at the factory on 720 Washington street.) The I.L.G.W.U. commented:

"That will only intensify the fight! The fact that the National Dollar Stores resorted to the hated anti-labor weapon, the restraining order, as protection against its own Chinese workers, will not help the friendly feeling that organized labor has for the present unfortunate struggle of the Chinese in their home against their aggressor. Calling for an injunction may temporarily remove pickets, but it never solves a labor problem."