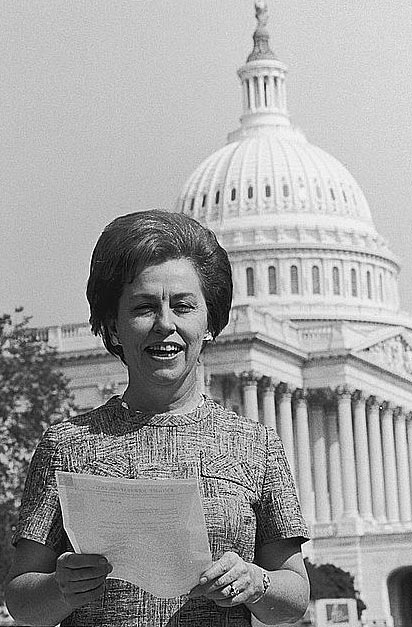 Representative Martha Griffiths, who was central in the introduction of sex as a protected category in the
Civil Rights Act, in August 1970. Prints & Photographs Division, Library of Congress.

Debate on the sex amendment to the 1964 Civil Rights Act revealed complex currents of political change. As the Congressional Record makes clear, conservative southern Democrats and northern Congresswomen from both parties were the primary defenders of the sex amendment during the debate in the House of Representatives. Martha Griffiths (D-Michigan) strongly defended the sex amendment even though the House Democratic leadership, as reflected in the remarks of Emmanuel Celler of Brooklyn and Edith Green of Oregon, energetically opposed the amendment. At that moment, Martha Griffiths represented the new politics that was possible after the 1963 report by the President's Commission on the Status of Women, which expressed a bipartisan desire to improve the working conditions of women in the paid labor force.[35]

A Democrat from Michigan in the Roosevelt-Truman tradition, Griffiths had seen through her work on the House Ways and Means Committee how Social Security laws discriminated against white women as well as Black. She was willing to step away from the labor feminist position Edith Green expressed and vote in concert with Republican women from Ohio, New York, and Washington to add sex as a blanket category. This strategy had heretofore been supported by equal rights feminists but opposed by labor feminists because it threatened to negate hours and wage laws for women, which most wage-earning women supported.

The representatives who voted in support of the amendment (which passed 168 to 133), included many white southerners who later voted against the Civil Rights Act and hoped that the sex amendment would sink the bill.[36] Yet supporters of the amendment also included many who were willing to endorse new federal protections for white women wage earners because they saw that protection for Black men and Black women was an inevitable result of the popular power of the Civil Rights Movement. The debate shows women surmounting old partisan barriers and uniting behind new legal strategies.