Skip to main content
Women and Social Movements »
How Did Women Peace Activists respond to "Red Scare" Attacks during the 1920s?

How Did Women Peace Activists respond to "Red Scare" Attacks during the 1920s? 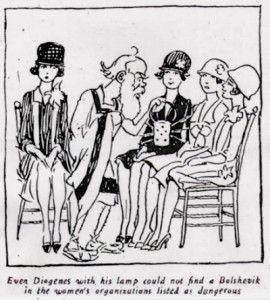 Many historians have examined the post-war Red Scare in 1919-1920, but few have explored the continued influence of the anti-red hysteria throughout the 1920s. This second Red Scare was generally more specific in its victimization, targeting mainly the women's peace movement. This opposition to pacifists grew from a post-war conservatism led by right-wing groups. The documents in this study address the question: What groups attacked the Women's International League for Peace and Freedom, and how did League members respond to the attacks?

After World War I many Americans supported a policy of military preparedness, which they hoped would protect the country from any future attack. The National Defense Act of 1920, which originally specified a peacetime army of 280,000 men and a National Guard of 454,000 men, reflected this sentiment.[1] The Women's International League for Peace and Freedom (WILPF) opposed this act. They believed that government policy and spending should be directed towards international arbitration and the promotion of world peace. Their internationalist perspective became the grounds on which nationalist groups denounced the peace movement as an un-American conspiracy of communists, radicals, and socialists.

Secretary of War John W. Weeks was the first public figure to initiate the campaign of slander against the women's peace organizations when he began speaking tours around the United States to counteract the WILPF opposition to the National Defense Act. He encouraged other military men to follow his example and many did, including the director of the Chemical Warfare Service, Brigadier General Amos H. Fries. (For more on the Chemical Warfare service and peace activism see another project on this website, Why Did the Women's International League for Peace and Freedom Campaign against Chemical Warfare, 1915-1930?) In response, WILPF began a policy of sending letters to their accusers, refuting each slanderous claim one by one. Document 2 in this project refutes Fries's claim that WILPF members took an oath against any involvement in war. The Woman Patriot took up the "slacker oath" issue in its pages. Other conservative writers like Fred R. Marvin and R. M. Whitney wrote articles for the magazine that falsely claimed connections between the peace movement and the communist movement, ranking individual members on a color code of radicalism.[2]

However, these attacks were not viewed as significantly damaging until the famous Spider-web chart appeared in Henry Ford’s newspaper, The Dearborn Independent, in 1924. This chart, which the Women’s Joint Congressional Committee later discovered had originated in the Chemical Warfare Bureau of the War Department, linked numerous women’s organizations and their members to communist and socialist doctrines. The chart received a great deal of attention both from the many it accused and from those who read it. Carrie Chapman Catt, former president of the National American Woman Suffrage Association, expressed her outrage at the chart in several articles in The Woman Citizen.[3] There she investigated the origins of the chart and defended the accused. Her discovery of the government sponsorship of the chart exposed the significant power that lay behind the redbaiting campaign.

The true extent of government involvement was never revealed publicly at the time, but later testimony of Emily Greene Balch and records of WILPF affirm that members, including Balch, were frequently followed by investigators from the Military Intelligence Division of the War Department throughout the 1920s.[4] This division, known as G-2, collaborated with patriotic groups like the American Legion to maintain records on radicals believed to be threats to national security.[5] The national WILPF office in New York City was frequently broken into and its files stolen or disrupted in the search for information about members.[6] Yet WILPF officers never revealed the tactics of espionage that the Intelligence Division employed against them.

WILPF also confronted patriotic opposition from other women’s organizations, the most persistent being the Daughters of the American Revolution (DAR). The DAR moved sharply to the right when new women took office in the mid-twenties, particularly the National President, Mrs. Alfred J. Brosseau. Before this new leadership the DAR had actually appeared on the original spider-web chart of 1924 as a radical organization. The new officials of the DAR cooperated with government bodies in investigating WILPF. They also produced their own blacklist of "doubtful speakers." This action led to internal disputes within the DAR as some members protested the organization’s involvement in the red hunt. The DAR president severely reprimanded both Eleanor St. Omer Roy and Helen Truft Bailie when they opposed attacks on women's peace groups.

The last four documents demonstrate the persistent nature of the second Red Scare. Professional patriots were still hounding pacifists and the peace movement well into the 1930s. The resolve to expose sentiments they viewed as dangerous and unpatriotic became for some military men a life-long campaign. Letters from William A. Allen exemplify such resolve. These attacks persisted despite Carrie Chapman Catt’s articles that proved the falseness of the "red" claims, and despite the court decision in Baldwin vs. Bridge, whereby Mrs. Baldwin’s claim that pacifists were "playing the communist game" was declared unfounded (see Document 20).

The peace movement was powerless to stop the anti-red hysteria. WILPF weathered these ludicrous accusations with dignity and restraint. Members denied each false claim with evidence of the organization’s true character and purpose. WILPF achieved a great deal for the peace movement in America; its survival of the second Red Scare proved the credibility of the organization. The documents in this project trace the attacks that WILPF faced and show how it dealt with them. Most of these documents can be found in the Papers of Lucia A. and Edwin Doak Mead, the Records of the Women’s International League for Peace and Freedom, The Woman Citizen, and the New York Times.