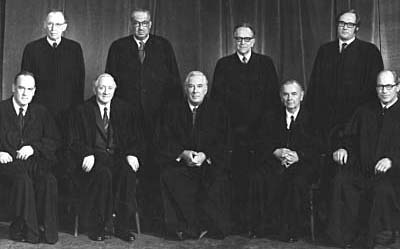 In this exchange of memoranda (documents 23A-23L), the justices debated the propriety of reinterpreting the Fourteenth Amendment while the ERA was pending. Their discussion centered on Justice William J. Brennan Jr.'s efforts to draft what he hoped would be a majority opinion in Frontiero v. Richardson, a case challenging a military benefits scheme that provided lesser benefits to the husbands of military servicewomen than to the wives of servicemen. Brennan hoped to convince at least four other justices to make sex a suspect classification, which would mean that, like race-based legal distinctions, sex-based legal classifications would be subject to the highest review standard of strict scrutiny, which required that a law be narrowly tailored to achieve a compelling government interest and was meant to ensure that laws did not discriminate against a group based upon antagonism or stereotypes. This was the position that Ruth Bader Ginsburg and her ACLU colleagues had been arguing since 1970.

Brennan was able to persuade only a plurality of the Court to support strict scrutiny for sex-based classifications. In Document 23A, Brennan proposed drafting an opinion making sex a suspect classification and awaited response from his colleagues. Document 23B reveals that Justice Byron R. White believed that the Court's decision in Reed v. Reed had already raised the level of scrutiny to which sex-based laws were subject. He expressed the view that passage of the ERA in Congress had made sex suspect, regardless of whether the amendment was ratified, vindicating Mary Eastwood's view that agitating for an ERA would help to persuade the justices to reinterpret the Fourteenth Amendment (see Document 15). However, White did not believe that making sex a suspect category and applying strict scrutiny were necessarily the same thing. He agreed with Justice Thurgood Marshall's view, expressed in an earlier opinion, that classifications based on suspect categories such as race and sex should be subject to a sort of sliding-scale standard of review.

Justice Potter Stewart, always cautious, wrote in Document 23C that he saw no reason to decide in this case whether sex was a "suspect criterion." In Document 23D, Justice Lewis F. Powell Jr., also a moderate advocate of judicial restraint, agreed with Stewart. He gave a more detailed explanation of why he believed that the Court should not, as he put it, preempt the democratic process by reinterpreting the Fourteenth Amendment while the ERA was still pending. Justice Harry Blackmun agreed with Powell's view in Document 23F.

Justice Brennan responded to Powell in Document 23G, defending his position that the Court should make sex classification a suspect category. Brennan argued that the Court "cannot count on the Equal Rights Amendment to make the Equal Protection [Fourteenth Amendment] issue go away." Brennan predicted, rather presciently, that the ERA would not be ratified by a sufficient number of states. But, he emphasized, Congress and many states had already determined that sex-based classifications were inherently suspect, and it was time for the Court to catch up.

Brennan was unable to convince four other justices to support his position. Chief Justice Warren E. Burger wrote in Document 23I that he had "never remotely contemplated such a broad concept" when he wrote the majority opinion in Reed v. Reed. While eight of nine justices were willing to invalidate the benefits scheme challenged in Frontiero (Justice Rehnquist dissented), only three other justices joined Brennan's opinion. Without a majority to make sex suspect, the standard of review for sex-based classifications remained unclear until the Court decided Craig v. Boren in 1976. In Craig, Justice Brennan wrote the majority opinion establishing an intermediate standard of review, which required that legal distinctions based on sex be "substantially related to an important government interest."

MEMORANDUM TO THE CONFERENCE

I'd prefer that approach.

As you will note, I have structured this opinion along the lines which reflect what I understood was our agreement at conference. That is, without reaching the question whether sex constitutes a "suspect criterion" calling for "strict scrutiny, "the challenged provisions must fall for the reasons stated in Reed. I do feel however that this case would provide an appropriate vehicle for us to recognize sex as a "suspect criterion." And in light of Potter's "Equal Protection Memo" circulated last week, perhaps there is a Court for such an approach. If so, I'd have no difficulty in writing the opinion along those lines.