Skip to main content
Women and Social Movements »
How Did the National Woman's Party Address the Issue of the Enfranchisement of Black Women, 1919-1924?

How Did the National Woman's Party Address the
Issue of the Enfranchisement of Black Women, 1919-1924? 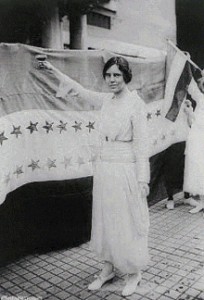 The documents in this study address the following question: How did the National Woman's Party address the issue of the enfranchisement of African-American women in connection with the passage of the woman suffrage amendment? This question is important, because although the Nineteenth Amendment to the United States Constitution, adopted in 1920, was designed to give all women suffrage, many black women were denied this right. Prior to 1920, black women were often denied full participation in the suffrage movement because suffrage leaders feared they would lose the support of the white southerners. So the fate of black women's voting rights after 1920 remained an important political issue within the women's movement.

Alice Paul, head of the National Woman's Party, was a suffrage leader who publicly advocated the right for all women to vote. Yet her actions often contradicted this view. In 1913, Paul became the leader of the Congressional Union, which in 1917 became the National Woman's Party. She urged the National American Woman Suffrage Association to change its state-based strategy and throw their power behind the effort to secure a federal suffrage amendment. Historians view her leadership as crucial to the successful congressional passage of the Suffrage Amendment in 1919 and its ratification in 1920.[1]

The documents in this project focus on Alice Paul's reactions to the demands of African-American women to participate as equals in the suffrage movement before 1920, and, after 1920, her negotiation of the choice between retaining her white southern constituency versus advancing the voting rights of black southern women. In 1913, Alice Paul organized a suffrage parade outside the White House. Before the parade, she expressed sympathy for black women's suffrage, but when the parade began, suffrage leaders asked Ida B. Wells not to march with the Chicago delegation.[3] Paul and other leaders were concerned about offending southern white women. Moreover, Paul would not publicly state that she endorsed black female suffrage.

In 1919, Paul described her goal as, "removing the sex qualification from the franchise regulations... to see to it that the franchise conditions for every state were the same for women as for men."[4] This statement was a subtle way of telling the white population that black women could be just as easily disenfranchised by state laws as black men had been. Alice Paul was forewarning black women even before suffrage was passed that she would do little to tamper with the right of states to disenfranchise black women.

In the South after 1920, black women who tried to vote experienced physical and economic intimidation, poll taxes, educational and character requirements, and they were excluded from the Democratic primary.[5] Alice Paul and the National Woman's Party did nothing to stop this. Stating that the enfranchisement of black women was a race issue, not a women's issue, Paul argued that black women should address the people who blocked their access to the vote rather than the National Woman's Party.[6]

Black women were often denied the right to speak at National Woman's Party meetings; Alice Paul said there was not room on the schedule for them. However, when black women did speak before the National Woman's Party, their opinions were severely criticized.[7] Black women became increasingly frustrated by the lack of attention to their needs. Addie W. Hunton led a delegation of sixty black women from fourteen different states to urge Alice Paul to make the race question a prime concern. Hunton believed that Paul was hostile to the cause of black women.[8] When the suffrage victory celebration was held in Washington D.C. in 1921, Mary Church Terrell asked Alice Paul whether she endorsed the enforcement of the Nineteenth Amendment for all women, and Paul refused to say that she did.[9]

Did Alice Paul believe that the disenfranchisement of Black women was solely a race issue and not a women's issue, or was she catering to the prejudices of her southern supporters? This question can be explored through the documents collected below. These documents also give readers a new perspective on the fight black women waged for enfranchisement. These documents can be found in the Papers of the National Woman's Party, Mary Church Terrell and the National Association for the Advancement of Colored People.