Skip to main content
Women and Social Movements »
What Were the Origins of International Women's Day, 1886-1920?

This proposal for an International Women's Day, made at the Second International Women's Conference at Copenhagen, appeared in the women's magazine of the German Social Democratic Party, Die Gleichheit. Authored by Clara Zetkin and others, it emphasized the need for attention to "Socialist precepts." 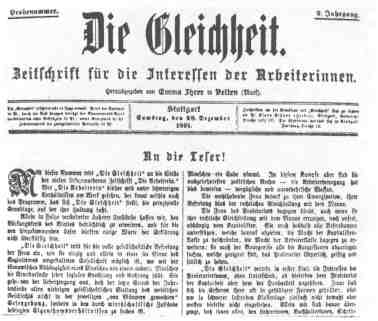 In agreement with the class-conscious, political and trade union organizations of the proletariat of their respective countries, the Socialist women of all countries will hold each year a Women's Day, whose foremost purpose it must be to aid the attainment of women's suffrage. This demand must be handled in conjunction with the entire women's question according to Socialist precepts. The Women's Day must have an international character and is to be prepared carefully.