The release of the Scottsboro Boys continued to top the list of worker demands during the Great Depression, as the Communist Party urged mass action on multiple fronts. This flyer called workers to demonstrate in Brooklyn, New York, on April 28, 1934, and to assemble at Union Square for the annual May Day show of solidarity. The call to "Free the Scottsboro Boys!" was one of many grievances workers were urged to protest at the demonstration. 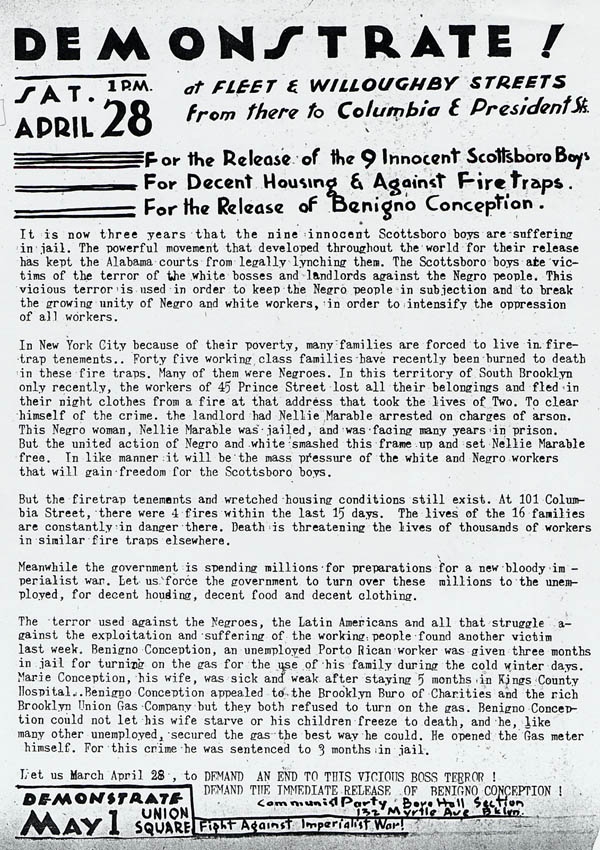 It is now three years that the nine innocent Scottsboro boys are suffering in jail. The powerful movement that developed throughout the world for their release has kept the Alabama courts from legally lynching them. The Scottsboro boys are victims of the terror of the white bosses and landlords against the Negro people. This vicious terror is used in order to keep the Negro people in subjection and to break the growing unity of Negro and white workers, in order to intensify the oppression of all workers.

In New York City because of their poverty, many families are forced to live in fire trap tenements. Forty five working class families have recently been burned to death in these fire traps. Many of them were Negroes. In this territory of South Brooklyn only recently, the workers of 45 Prince Street lost all their belongings and fled in their night clothes from a fire at that address that took the lives of Two. To clear himself of the crime, the landlord had Nellie Marable arrested on charges of arson. This Negro woman, Nellie Marable was jailed, and was facing many years in prison. But the united action of Negro and white smashed this frame up and set Nellie Marable free. In like manner it will be the mass pressure of the white and Negro workers that will gain freedom for the Scottsboro boys.

But the firetrap tenements and wretched housing conditions still exist. At 101 Columbia Street, there were 4 fires within the last 15 days. The lives of the 16 families are constantly in danger there. Death is threatening the lives of thousands of workers in similar fire traps elsewhere.

Meanwhile the government is spending millions for preparations for a new bloody imperalist war. Let us force the government to turn over these millions to the unemployed, for decent housing, decent food and decent clothing.

The terror used against the Negroes, the Latin Americans and all that struggle against the exploitation and suffering of the working people found another victim last week. Benigno Conception, an unemployed Porto Rican worker was given three months in jail for turning on the gas for the use of his family during the cold winter days. Marie Conception, his wife, was sick and weak after staying 5 months in Kings County Hospital. Beningo Conception appealed to the Brooklyn Buro of Charities and the rich Brooklyn Union Gas Company but they both refused to turn on the gas. Beningo Conception could not let his wife starve or his children freeze to death, and he, like many other unemployed, secured the gas the best way he could. He opened the Gas meter himself. For this crime he was sentenced to 3 months in jail.

Let us March April 28, to DEMAND AN END TO THIS VICIOUS BOSS TERROR!
DEMAND THE IMMEDIATE RELEASE OF BENIGNO CONCEPTION!