Skip to main content
Women and Social Movements » Documents
How Did Black Women in the NAACP Promote the Dyer Anti-Lynching Bill, 1918-1923? 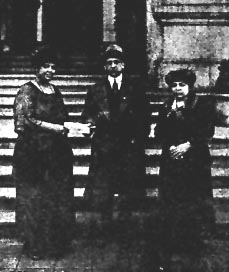 The Anti-Lynching Crusaders was not the only black women's organization to promote anti-lynching legislation in the 1920s. The following article describes the work of Mrs Mossell Griffin, chairman of the legislative department of the National Association of Colored Women (NACW), as she sought to ensure the passage of the Dyer Bill by sponsoring similar legislation in State legislatures. For more on the NACW see "What Gender Perspectives Shaped the Emergence of the National Association of Colored Women, 1895-1920?" also on this website.

Perhaps no single person deserves more credit for the enactment of the Anti-Lynching Bill which recently passed the Legislature than Mrs. M. Mossell Griffin. Not only this but Mrs. Griffin, who is chairman of the Legislative Dept., National Asso. of Colored Women's Clubs, has similar bills before various State Legislatures and is waging a courageous fight in each State. It is her desire to secure the required number (thirty eight) to force Federal action on the Dyer Bill. Interviewing Mrs. Griffin, she very modestly disclaimed any particular credit but seem disposed to give all the credit to others. "Our victory in Pennsylvania," said Mrs. Griffin, "is encouraging in that it will enable me to present this bill as a model when during the next four months, I shall appear before the Legislatures of a number of States. The bill just passed is the first bill which is a duplicate of the original Dyer Bill in New Jersey, West Virginia, and other States though there were a few changes made. I shall go to Richmond, Va., and place this bill before the next session of the Virginia body. This will be the first of the Southern States to be tackled. Mr. Andrew F. Stevens deserves great credit for the masterly way in which he handled our bill, working day and night with and for us.

His strategy was wonderfully planned and he out-generalled the opposition, which was quite formidable. There were men who had made campaign pledges, such as Long, of Coatesville and he kept his pledge, voting "No." There were nine others who voted against the bill, Mr. Woodruff, who fought the Equal Rights Bill, being among them. When these men cast their votes against a measure such as ours I feel that their usefullness in public life is at an end and as chairman of the Legislative Branch the Whitelaw Hotel in Washington, of our Department with offices in [sic] I shall do all I can to defeat them. The greatest aid to our bill was the fact that our efforts to put it across were not heralded with a blare of trumpets--no large crowds of our people strolling in and out of the Capitol. No notice was given, we knew our enemies and we put the bill over them. Thousands of bills are laying on the table, being referred to committees and placed on postponed calendars, but Mr. Stevens successfully got our bill through in five weeks. Publicly, I wish to thank him for his services to the Federation of Women's Clubs and by no means do we overlook Attorney Frank Taylor, of the firm of Lewis and Norris. When Senator Barr placed his objections on file, they were answered by Mr. Stevens through Attorney Taylor, to whom Mr. Stevens referred them. Within six hours our representative was able to return to Harrisburg with the brief of Senator Barr torn to shreds. Justin Carter, of Harrisburg, Attorneys Dickerson and Norris, of this city are attorneys for our organization and were associated with me from time to time. Mrs. Maud Coleman, our State Lobbyist, and a live wire, was with me in the thickest of the fight at Harrisburg. Mrs. Julia Craig, State Executive Secretary, Mrs. Charles Lewis, State Legislative chairman are to be commended. Mrs. Lewis secured the silver pen from Caldwells, the jewellers which will be used by Governor Pinchot when he signs the bill and presented to the Association of Women's Clubs at its convention at Chicago in June, 1924. I desire to thank all who were interested in the bill. Mr. Stevens is to be honored with a reception, notice of which will be given.