Skip to main content
Women and Social Movements »
How Did Women Peace Activists respond to "Red Scare" Attacks during the 1920s?

The "notorious spider-chart" propelled, as well as initiated, many "red" accusations from the Daughters of the American Revolution, the American Defense Society, and The Woman Patriot. When the Women's Joint Congressional Commission investigated the source of this chart, it discovered that Brigadier General Amos A. Fries's assistant, Lucia Maxwell of the Chemical Warfare Bureau, compiled it. The discovery of government involvement in the chart's origins aroused the protest of Carrie Chapman Catt (see Document 4). The chart's title was taken from a report on seditious activities compiled by the Lusk Committee in 1920. State Senator Lusk of New York headed this committee which conducted raids on "radical" organizations and investigated alleged radicals.

The chart accuses the leading women reformers named in the boxes along its margins of a variety of socialist and communist affiliation. Some of these are true, most are distorted, and some are untrue. For example, Florence Kelley did not advocate "the gradual abolition of property privileges." The chart links these names with fourteen mainstream women's organizations, such as the League of Women Voters, and two mainstream umbrella organizations, the Women's Joint Congressional Committee, and the National Council for Prevention of War.

The Women's Joint Congressional Committee was formed in 1920 to advance the legislative agenda of the women's organizations named in its central column. The National Council for the Prevention of War was one of three peace organizations formed between 1919 and 1925, the high point of peace activism in American History. Those committed to internationalism formed organizations to support the League of Nations, those committed to pacifism joined WILPF and the War Resisters League. Liberal reformers who affiliated with both internationalism and pacifism organized the National Council for Prevention of War.[8] 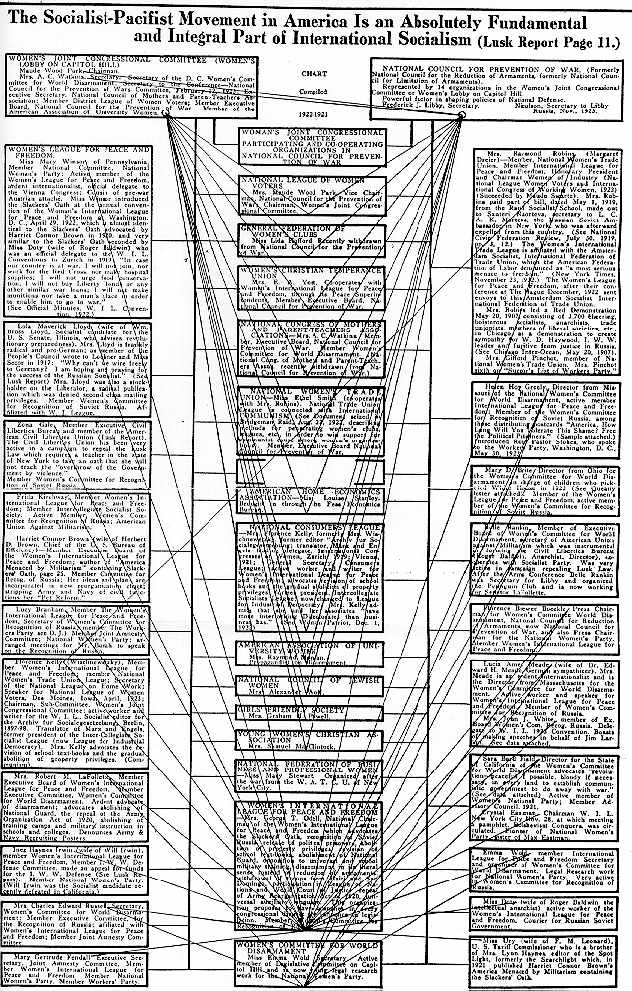