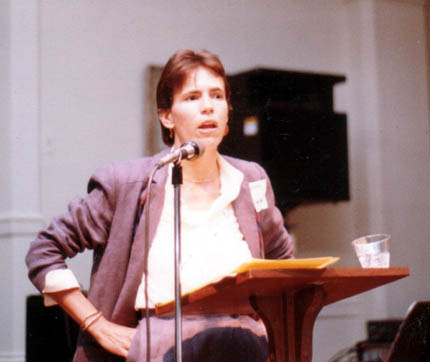 The first issue of Labor Pains, an eleven-page newsletter, included articles on sex discrimination in the workplace generally, but focused on sexual harassment. Several articles offered support to victims of harassment through telling stories of sexual harassment, discussing ways to fight back against harassment, and encouraging victims to contact WWU. This front page article by Julie Friedman reported on the "historic" May 4 Sexual Harassment Speak-Out, recounting the stories of several of the women who spoke and commending them for their courage. Carmita Wood wrote a piece entitled, "Woman Alone," about her experience of being a controversial figure because she publicly challenged sexual harassment in the workplace (see Document 6I). The newsletter also reported on harassment charges brought in other parts of the country by a police officer in Los Angeles (see Document 6G) and a woman employed at a Fire Department in Gainesville, Florida. Another article reported on national support for raising the issue of sexual harassment, citing the work of Eleanor Holmes Norton, Commissioner of the New York City Human Rights Commission, Congresswoman Bella Abzug, and Karen DeCrow, President of the National Organization for Women, who was reportedly "traveling around the country telling audiences about the exciting work WWU is doing and the importance of the issue of sexual harassment on the job" (see Document 6P).

Speak Out Draws Tears and Anger

On May 4, 275 women attended the historic Speak Out on the issue of sexual harassment at the GIAC in Ithaca. Speaking Out is giving personal testimony and listening to others speak of their own lives.

About 20 women spoke during the day. It took great courage for these women to reveal such deeply personal stories. Women shared incidents they had never before discussed, uncovering feelings they had long since buried.

A mail clerk told of constant harassment by her boss which ultimately forced her to look for another job. She had complained, but nothing was done. When she finally reacted angrily to his advances, he responded by putting a permanent letter in her personnel file denouncing her as a poor worker.

Another woman spoke of the humiliation and anger she felt at being judged by physical appearance rather than job performance. She told us how she felt about falling short of arbitrary sexual standards and of her resentment toward women who "measured up." She saw this as a means of dividing women workers against one another.

Those of us in the room and the speakers themselves were moved to anger and tears. One woman cried openly as she told us of having to give up her dreams of going to law school because of a professor who refused to give her a recommendation after she turned him down.

The process of exposing ourselves in this way was painful to everyone. We became enraged at the position we have been forced into and taught to accept. Sexual harassment affects women from musicians to waitresses to secretaries—we heard from them all. Some cases are more overt than others, and some are physical and some are not, but all are emotionally destructive.

The anger we felt during the Speak Out is uniting us to fight this oppression. On May 4, 40 women met and officially launched Working Women United.