Skip to main content
Women and Social Movements »
How Did Iowa Coalitions Campaign for the Equal Rights Amendment in 1980 and 1992?

This brochure, distributed by the Iowa ERA Coalition in 1980, appears to be one of the most elaborate of the Coalition’s brochures in terms of production.  It is one of the few brochures both created and distributed by the Coalition to use artwork: an ink drawing of an unhappy looking elderly woman, “Ruth,” was displayed opposite the text. The brochure personifies some of the Coalitions concerns for widow's, specifically widow's required to pay inheritance taxes on family farms after the death of the husband. The brochure appeals to the sympathies of Iowa voters including farmers and farmer's wives. The picture of the elderly woman Ruth represents not only rural housewives, but other homemakers affected by the death of a spouse. The brochure addresses the need to assign an economic value to women's work within the home to protect the family in the event of death or seperation.

Ruth and her husband, Herb, bought and ran their farm. They worked side by side and they worked hard.  They both poured their sweat into this land.

But the farm was in Herb’s name, and Herb died.

In 1973, that meant that Ruth had to pay inheritance tax on the whole farm -- unless she could show records that she had put down her own hard cash to help buy the place.  Ruth couldn’t.  She had never worked in town.  Her years of cooking and combining weren’t worth a nickel.

In 1974, the Iowa Legislature thought this was unfair. They changed the law.  This story can’t happen again . . . unless you let it happen!

Foes of Iowa ERA want things the way they used to be. They have tried to change the law back.  Supporters of equality and fairness fought them and stopped them -- this time.

Voting “YES” to IOWA E.R.A. on November 4, 1980 means that you think the fight should never happen again.  Passing the IOWA E.R.A. says it won’t.

“To ensure that the state shall not deny or restrict the
equality of rights under the law on the basis of gender.” 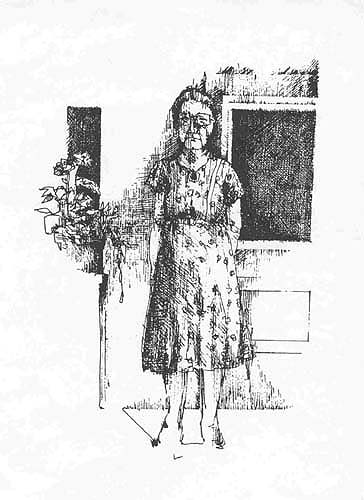