Skip to main content
Women and Social Movements »
How Did Iowa Coalitions Campaign for the Equal Rights Amendment in 1980 and 1992? 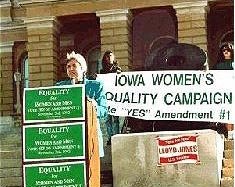 Documents selected and interpreted by
Dan Itzkowitz
under the direction of Professor Victoria Brown
of Grinnell College, May 2002

In statewide referendums in 1980 and 1992, Iowans voted against an Equal Rights Amendment to the state constitution.  In the periods leading up to each referendum campaign, the ERA appeared to have the support of the majority of Iowans.  However, media campaigns launched by advocacy groups on both sides of the ERA turned what appeared to be a popular issue into the site of pitched political battles. This collection of documents illustrates how the pro-ERA campaigns in Iowa argued on behalf of the ERA in that context.

The quest for an Equal Rights Amendment grew directly out of the woman’s suffrage movement.  Indeed, for some suffragists, specifying the equality of women in the United States Constitution went hand in hand with the struggle for the right to vote.  Initially drafted by suffragist Alice Paul and her National Woman’s Party, the Equal Rights Amendment was first introduced in Congress in 1923.  The amendment read: "Men and Women shall have equal rights throughout the United States and in every place subject to its jurisdiction.  Congress shall have power to enforce this article by appropriate legislation."[1]

However, despite the support from some notable women’s organizations, the ratification of a federal amendment was by no means a common goal of American feminists between the world wars.  At issue for advocates of woman’s rights in the 1920s and 1930s was the fact that an equal rights amendment would have struck down Progressive legislation aimed at protecting women from unhealthy and harsh working conditions.  At this point in American history women, who were excluded from most labor unions, faced an uphill struggle in bargaining for fair contracts and found pre-New Deal protective labor laws to be their best route to better working conditions.  However, laws that established minimum wages and maximum hours for working women, but not men, would have been unconstitutional under the proposed amendment.  For this reason, feminist reformers--Carrie Chapman Catt, Florence Kelley, and Jane Addams among them--opposed the passage of the ERA.  So while the amendment was introduced in every Congress from 1923 to 1942, a coalition of Progressive organizations and labor unions, not to mention conservatives, sealed its defeat.[2]

Support for a federal ERA grew in the years during and following World War II.  The Republican Party approved an ERA plank in its official platform in the early 1940s and by the 1950s some prominent Democrats, including Eleanor Roosevelt, dropped their opposition in deference to the United Nations charter, which called for the "equal rights of men and women."[3]

The passage of Title VII of the Civil Rights Act of 1964, which prohibited job discrimination on the basis of sex, paved the way for securing widespread progressive support for the ERA.  By 1970, federal courts ruled that Title VII invalidated female-only protective legislation and extended these protections to men as well as women.  With their historical objection overcome, liberal and labor opposition to the ERA "began to wane."[4]  In the summer of 1970, the House of Representatives passed the ERA by an overwhelming majority; by 1972, the amendment had passed the Senate as well and was sent to state legislatures for ratification.

Passage of the ERA quickly became one of the top goals for the burgeoning women’s rights movement in the U.S.  The National Organization for Women (NOW) had placed an Equal Rights Amendment at the top of its first Bill of Rights in 1967 and a growing number of feminists was ready to mobilize for the ERA’s passage in the states.  Nancy Woloch contends that "the impact of feminist political clout was symbolized by congressional passage of the ERA."[5]  And if the amendment’s congressional passage was seen as a symbol of political influence, its pending ratification by the states became a symbol of second wave feminism’s victory in the hearts and minds of the American populace.

After Congressional passage, the ERA required ratification by the legislatures of 38 states in order to become law.  At that time, proponents anticipated no trouble in achieving state ratification.[6]  Iowa was one of six states to ratify the ERA within three days of its adoption in the U.S. Senate.  By early 1973, 24 states had ratified the amendment, but by 1975 the ratification movement had stalled at 34 states.  By 1978, only one more state had ratified the ERA and four had voted to rescind their approvals.[7]  In 1982 the deadline for ratification was reached and the amendment died.

It seems to be the federal ERA’s role as a symbol of feminism that caused it to fail.  This was especially true after the Supreme Court’s decision in Roe V. Wade secured a woman’s right to have an abortion. By that time, opponents of feminism and abortion rights began to see the Equal Rights Amendment as an integral part of the unwanted social changes advocated by the "women’s liberation" movement.  With feminist organizations, such as the National Organization for Women, vocally supporting both the ERA and the Roe decision, the amendment became indelibly linked with abortion in the minds of its conservative opponents.  As a symbol of progressive feminism, and imbued with all the connotations that came with that symbol, the ERA quickly became the site of a struggle between conservative and progressive social values.

Jane Mansbridge makes the ironic point that the ERA would have had little, if any, real impact on relations between men and women in the foreseeable future, but the groups that fought for and against it argued as if it would.  Supporters of the amendment touted it as a necessary measure in overcoming gender injustices and opponents argued that it would bring about dangerous changes in the social life of the nation.  According to Mansbridge, "With both the proponents and opponents exaggerating the likely effects of the ERA, legislators in wavering states became convinced that the ERA might, in fact, produce important substantive changes--and the necessary votes were lost."[8]

It is in this historical and political context that the Iowa Equal Rights Amendment campaigns must be viewed.  Frustrated with the stalled federal ERA and buoyed by victory over a campaign to rescind the state’s ratification of the federal ERA, supporters introduced an Equal Rights Amendment to the Iowa state constitution in 1978.  After passing the state legislature in 1978 and 1979, the Iowa ERA was submitted to a statewide referendum in 1980.  ERA supporters hoped to make Iowa the seventeenth state to include guarantees of gender equality in its constitution.  Between 1970 and 1979, state ERA referendums were held in 18 states, 14 of which passed.

The 1980 campaign for the Iowa ERA was spearheaded by a group called the Iowa ERA Coalition.  The coalition was made up of organizations from almost all of the state’s 99 counties and included groups such as the Iowa Division of the American Association of University Women, the Iowa Library Association, the Iowa AFL-CIO Auxiliaries, and the Iowa National Organization for Women.  This coalition mobilized a media campaign five months before the election, distributing brochures and pamphlets and placing radio, television, and print advertisements advocating the passage of the Iowa ERA.

In 1980, opponents of the ERA, such as the Eagle Forum, the National Right to Life Committee, and the Iowa Conservative Union, coalesced as Iowa Women Against the ERA to fight the passage of the amendment.  The anti-ERA advertising campaign focused on radio, television, and print media as did the Iowa ERA Coalition, but due to lack of funds, the anti-ERA campaign was concentrated in a media blitz shortly before the election.

The anti-ERA campaign in Iowa, as it had throughout the nation, focused on a paradoxical two-pronged argument: passage of the ERA will do nothing that existing laws do not already do and passage of the ERA will have a multitude of negative social implications.  It was the latter of these two arguments that was stressed in the media blitz before the 1980 referendum.  The anti-ERA campaign warned that the courts could, and would, interpret the amendment in ways that would have dire consequences on Iowa life and morality, including the elimination of separate toilets for men and women, mandatory state funding of all abortions, and the legalization of homosexual marriage.  Television commercials with images of same-sex couples embracing reinforced these arguments.  In addition, the anti-ERA campaign distributed pamphlets asserting that, "a vote for ERA is a vote for abortion," and another saying that homosexuals will use the ERA to gain the right to "teach in our schools. . . and adopt children."[9]

Twelve years later, in 1992, Iowa ERA supporters were once again able to gather the momentum to bring the state Equal Rights Amendment to a statewide referendum.  As in 1980, many of the same organizations on either side of the issue came together in coalitions.  Those in favor of the ERA formed two groups: ERA Iowa 1992 and Iowa Women’s Equality Campaign. Those opposed revived the familiar Iowa Women Against the ERA and concentrated on a similar strategy to defeat the amendment.  As in 1980, public sentiment before the campaign greatly favored the ERA.  Once again, however, the ERA was defeated by a pre-election negative media blitz.  This time, the amendment was turned with 48% in favor and 52% opposed.[11]

Anti-ERA forces used the same advertising campaign in 1992 that they had in 1980 and to the same effect.  According to Michelle Rubin, "despite the fact that its dated look was a stark contrast to the slick political ads of the 1990s, the campaign was very effective in defeating the amendment."[12] The effectiveness of the anti-ERA media campaign can been seen in its success in framing the debate on its own terms. For example, in its post-election analysis, the Feminist Majority Foundation reported:

Over half of the respondents in the post-election poll believed that passage of the ERA would secure more rights for gays. Thirty-two percent of respondents said that the effect of the ERA on gay rights would make them more likely to vote against the amendment. In response to an open-ended question about why respondents either supported or opposed the amendment, eleven percent of "No" voters cited gay rights as the reason they voted against the ERA.[13]

Unlike the federal ERA, the Iowa ERA referendums were voted on directly by the people of the state.  These documents--a collection of brochures, radio advertisements, and television advertisements from the pro-ERA campaigns of 1980 and 1992--shed light on the ways in which the ERA was pitched to the public. Although the Iowa Women Against the ERA would not approve the inclusion of their materials in this document collection, the material provided here illuminates the strategies and issues that decided the Iowa ERA campaigns of 1980 and 1992.