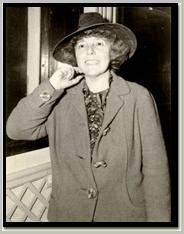 Dorothy Kenyon in 1939, when she represented the United States in the League of Nations. Courtesy
Sophia Smith Collection, Smith College.

Despite Dorothy Kenyon's argument that exempting women from jury service violated their rights as equal citizens and Gwendolyn Hoyt's protestations that she had been denied a jury of her peers, the U.S. Supreme Court affirmed the Florida ruling upholding Hoyt's murder conviction by an all-male jury. In an opinion authored by Justice John Marshall Harlan that would become infamous among feminists, the Court declared that since "woman is still regarded as the center of home and family life," distinguishing between men and women with respect to jury service was reasonable and therefore constitutional. Although lower courts began to strike down laws that absolutely excluded women from jury service in the mid-1960s, the U.S. Supreme Court did not require states to completely equalize jury service requirements for women and men until 1979.