Skip to main content
Women and Social Movements »
Pacifism vs. Patriotism in Women's Organizations in the 1920s: How Was the Debate Shaped by the Expansion of the American Military?

Document 21: Political Cartoons appearing in the Daughters of the American Revolution Magazine, 1927-1930.

Document 21: Political Cartoons appearing in the Daughters of the American Revolution Magazine, 1927-1930.

Bailie's protest did nothing to sway the DAR leadership to alter their militaristic stand. They expelled her from the organization following an internal trial which Bailie described as a "court martial."[19] The Daughters continued to believe that they alone were the defenders of all that was right in America. They could not relax their lobby for national defense. The political cartoons below, which appeared in the DAR Magazine between 1927 and 1930, illustrate this agenda. 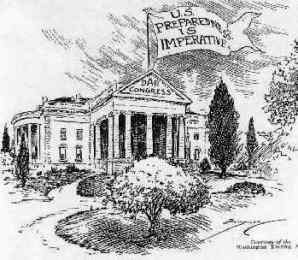 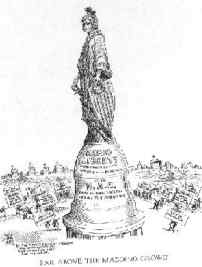 "Far Above the Madding Crowd," June 1928
Text of Bell: Armed Liberty/ Surmounting the U.S.Capitol/ Symbolic of the Principles of the D.A.R./ Other Patriotic Societies and All True Americans
Text of picket signs: You are all wrong. * Take us off your blacklist * Russia our ideal * Down with the Army and Navy * You are the dupe of capitalism * Pacifist Propaganda * On with world revolution * We do our boring from within the capitol * The rest of the world can be trusted * Down with you and Wall St. * Pacifist Propaganda
Cartoonist: James North, Washington Post, April 17, 1928 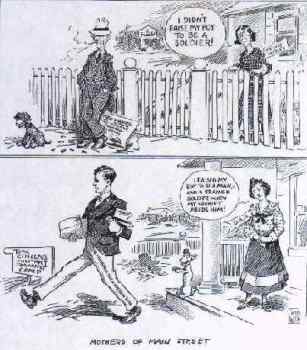 "The Mothers of Main Street," June 1928
Pacifist Mother: I didn't raise my boy to be a soldier!
Sign: Men wanted for civilian training camps.
D.A.R. Mother: I raised my boy to be a man--and a trained soldier when my country needs him!
Sign: To the Citizens' Military Training Camp
Pant Leg: the Lindbergh type of American youth
Cartoonist: James North 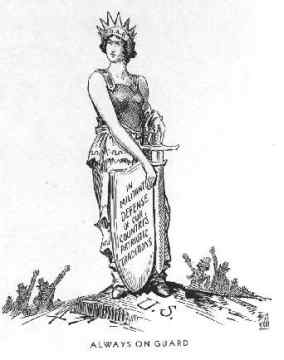 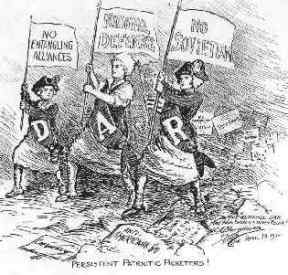