Skip to main content
Women and Social Movements » Documents
Why Did the Iowa League of Women Voters Oppose the Equal Rights Amendment during the 1940s and 1950s?

Why Did the Iowa League of Women Voters Oppose the
Equal Rights Amendment during the 1940s and 1950s? 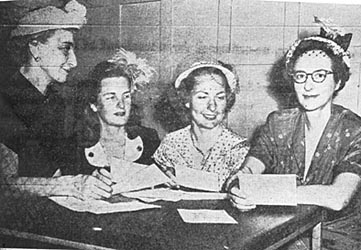 Documents selected and interpreted by
Maggie Campbell
under the direction of Professor Victoria Brown
of Grinnell College, May 2002

Formed in 1920, immediately following the ratification of the Nineteenth Amendment, the League of Women Voters was designed as a nonpartisan, voluntary organization intended to educate women to exercise their new duties as voting citizens.  At its inception, the League was composed of many former members of the National American Woman Suffrage Association (NAWSA), an organization that disbanded after passage of the Nineteenth Amendment.  Over the years, the League's goal grew beyond the education of its members to include educating the American citizenry on political issues.  The League, though nonpartisan, has always taken specific positions on political issues through a process of study and debate leading to a decision made by consensus and not based upon party affiliation.  In the 1940s and 1950s, League members studied a range of civic, state, national, and international issues, among which the Equal Rights Amendment (ERA) was frequently discussed and debated.

The National Woman's Party (NWP), led by suffragist Alice Paul, sponsored the ERA in every session of Congress starting in 1923.  The text of the amendment then read: "Men and women shall have equal rights throughout the United States and every place subject to its jurisdiction." The ERA reflected the NWP's single-minded focus on gaining equality for women through a constitutional amendment. The League of Women Voters, by contrast, was more broadly concerned with a variety of social reform issues.  This difference between the two post-suffrage organizations was rooted in differences between Paul's militant suffragist organization, the Congressional Union, and NAWSA, the League's more mainstream predecessor.  The tension between the two organizations grew out of their different approaches in the suffrage campaign and fueled their differences over the ERA.  The NWP aimed at ending all sex discrimination with a single constitutional amendment, and the League felt this approach threatened hard-won labor and social legislation for women since such legislation was based on differences between men and women and the ERA advocated policies based on the similarities between men and women. (See the ERA project on this site.) The League favored a more gradual approach fashioned to meet the needs of different groups of women, especially wage-earning women who benefited from laws protecting women in the workplace.[2]

Both nationally and in Iowa, League leaders also believed that a blanket federal amendment intended to end all sex-based discrimination would be too easy to evade at the state and local levels.  The League favored step-by-step legal revision of discriminatory laws or practices, arguing that this process would provide a more permanent and enforceable solution to the problem of sex discrimination. (See Document 8 and Document 9) The League also viewed the language of the ERA as ambiguous; it regarded the undefined term "equal rights" as a potential source of complication in legal interpretation.

In making these arguments, League leaders aligned itself with their own Progressive Era roots in social and economic reform.  League members viewed the ERA as an elitist legal construction that ignored social realities by privileging the abstract individual woman over the concrete needs of either working women or women who were economically dependent on their husbands.  In all of these positions, the Iowa League of Women Voters was in agreement with the national League and its sister state affiliates.

The League of Women Voters of Iowa was founded in the fall of 1919 at the encouragement of NAWSA's president, Carrie Chapman Catt, an Iowa native.  The Iowa League was launched at the final meeting of the Iowa Equal Suffrage Association in Boone, Iowa.  Though woman suffrage had not yet been passed at the federal level, Iowa ratified the Nineteenth Amendment on March 28, 1919, making it the tenth state to do so.[3] In Iowa, as well as in all other states, one of the requirements for beginning a local chapter of the League was that members conduct a "Know Your Government" study, the findings of which were released to voters in order to better inform them about the workings of their municipal governments.  The process of compiling the information for this initial study not only put League members in close contact with their local politicians but also familiarized them with the details of government and equipped them to educate their fellow citizens.

During the 1940s and 1950s, League chapters served their states and local communities by providing civic education on issues ranging from clean water and child welfare to the city manager form of government and public school reform.  This aspect of League activism is widely acknowledged; in fact, historians of women tend to characterize the League as an organization that "explicitly disavowed feminism and even denied any particular concern with women's issues."[4] The papers of the Iowa League of Women Voters make clear, however, that the local, state, and national Leagues were also concerned with more controversial issues including racial justice and sexual equality. (See Document 2)  One example of the League's participation in achieving racial justice was its involvement in reforming housing codes in the 1950s in Des Moines that pertained specifically to families of color.  As part of its public discussion of sexual equality, the League actively lobbied against the ERA and in favor of a National Committee on the Status of Women. (See Document 4 and Document 5) It also fostered public discussion of the Iowa Married Persons' Bill, which it described as a "vicious measure" that threatened "to deprive married women--and eventually ALL women--of the right to work."[5]

The League's opposition to the ERA did not arise out of avoidance or disavowal of women's rights issues but, rather, out of a belief that sex discrimination had to be attacked from the bottom up, not from the top down.  The League thought that specific legislation that addressed specific aspects of sex discrimination would be a more effective approach than a federal amendment. (See Document 10 and Document 11 ) This stance did not make the League anti-feminist, but it did make it less threatening than the National Woman's Party. League members actively sought state legislation as an alternative to the ERA working alongside other ERA opponents, the National Consumers' League and the Women's Trade Union League. (See Document 12)

During the 1940s and 1950s, the League of Women Voters of Iowa quadrupled its membership, jumping from around 500 in 1943 to just over 2,000 by March of 1955.  This rate of growth was about twice as strong as that for national membership during the same time period.  The members of the Iowa League were not, however, entirely representative of the women in their state.  A 1958 membership survey revealed that the typical League member in Iowa was a white college graduate who was both married and employed in a white-collar job that paid her between $4,000 and $8,000 a year.[6] During this period in Iowa's history, the typical white, married woman was not a college graduate and did not work outside the home, especially not in a well-paid white-collar job.[7]

The Iowa League's records in regard to women's rights in the 1940s and 1950s make clear that the Iowa chapter was politically sophisticated in the way it joined the League's national and state agendas. For example, in 1943, in the midst of World War II, when women's importance to industrial production was most evident, the ERA was approved by both U.S. Senate and House Judiciary Committees for the first time in twenty years. That year, the lead sponsor for the ERA in the Senate was actually Senator Guy M. Gillette, an Iowa Democrat. (See Document 1 and Document 3) In response to Gillette's role and the ERA's increased chances of passage, the Iowa League swung into action, utilizing its networks at every level of politics to lobby against the amendment. League lobbying efforts on this issue continued through the 1940s and into the 1950s. (See Document 6)

By 1955, instead of using its energy to continue opposing the ERA, the League decided to redirect its efforts toward the alternative it had always favored: step-by-step reform of specific discriminatory practices. Opposition to the ERA still appeared on the League's national program in 1955, but only because it had become a standard element of League rhetoric. (See Document 14) The defeat of the ERA was no longer the main goal toward which the League directed its efforts. However, ignoring the ERA debate did not mean that the League pushed women's issue to the back burner. (See Document 13) In fact, the 1955 national League program included a plank calling for "Removal of legal and administrative discriminations against women."[8] The wording was similar to the text of the ERA, but would be achieved in a radically different manner.  After thirty-two years of consistent opposition, the League finally decided that, instead of expending energy on debating with the NWP, it would shift its focus from the debate over the ERA to its own program and its own goals.

All of this activity, as significant as it was in the debate over the ERA, challenges the stereotyped image of Cold War women.  League records show that women were not only active outside of their homes, they were active in ways that specifically addressed the issues of "equal rights" that were associated with the Second Wave women's movement of the 1960s and 1970s.  In fact, as some historians have argued, the strategies and ideals of women's activism in the 1920s were a foundation for the women's movement of the 1960s and 1970s.[9] The documents of the League of Women Voters show that women's activism did not disappear in the 1940s and 1950s and suggest that their activity during those years provided a base for the women's movement that emerged after 1970.

As you look through the following documents, you may notice that one type of material is conspicuously absent.  There are no articles or publications from the popular magazines and newspapers of the time included in this set of documents.  This gap suggests that there was very little coverage of women's extra-domestic activities in the public press.  Membership statistics and internal records, in contrast, show that activity was consistent and significant, while magazines like The Ladies' Home Journal, Newsweek, and Time typically neglected women's political activities.  Even local newspapers rarely emphasized the League's political role.  Articles from local newspapers, including The Des Moines Register and The Cedar Rapids Gazette, written in the 1940s and 1950s, focused on League-sponsored social activities, such as teas and luncheons, and neglected to cover the political aspects of League work. League members relied on the organizations own publications including the newsletter Action. (See Document 7)

Despite the lack of popular press coverage of women's activities outside of their homes, there was persistent and effective political involvement among League members, both in Iowa and throughout the country. However, the lack of coverage of women's political activity structured the story that was told about women in the 1940s and 1950s for years to come.  The following documents demonstrate that one of the best ways to understand history is to look at the internal publications, records, and correspondence of specific organizations.