In its Scottsboro defense campaign, the International Labor Defense (I.L.D.) used graphic and photographic images to heighten interest in the case and personalize the participants to would-be supporters. As an example, this I.L.D. stationery counterpoised pictures of all nine Scottsboro Boys with an incarcerated Heywood Patterson and his mother, Janie Patterson.

Dating probably from 1933, the letter called for a meeting the day after a march on Washington, D.C., led by the I.L.D. with Ruby Bates and Janie Patterson in the vanguard of dignitaries. The protesters received a rebuff from President Roosevelt, who failed to meet with them or acknowledge their cause.

The stationery carried the title "Scottsboro New Trial Emergency Fund," a campaign necessitated by the April 9th conviction of Heywood Patterson a second time at the trial in which Ruby Bates recanted her earlier testimony. Thus, the images of Heywood and Mrs. Patterson reminded those receiving this letter what was at the heart of the protest--the life of Patterson and the other Scottsboro Boys and the Scottsboro Mothers' sad, but steadfast, presence in the protest movement. 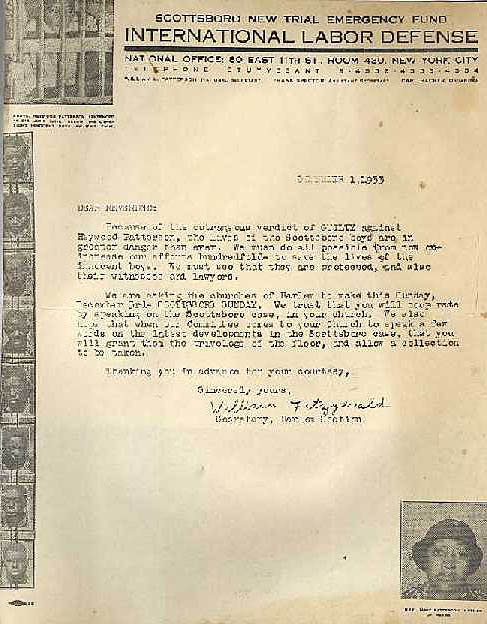 TO ALL MEMBERS OF THE INTERNATIONAL LABOR DEFENSE OF HARLEM!

The I.L.D. must now further develop and organize the fight to save the nine innocent Scottsboro boys. The I.L.D. was able to save the boys thus far by rallying hundreds of thousands of Negroes and white workers all over the world to their defense. The fight must be continued.

THE SCOTTSBORO BOYS SHALL NOT DIE! THEY MUST BE FREED!

For this purpose a meeting of all the I.L.D. members of Harlem is called for Tuesday, May 9.

At this meeting plans will be discussed to further organize for the defense of the Scottsboro boys.

You as a member of the I.L.D., should therefore attend this highly important meeting without fail. William L. Patterson, national secretary of the ILD will outline the plans for our future work for the defense of the Scottsboro boys. If your branch has called a meeting for the same evening, we suggest that it be postponed and that you attend this meeting at St. Lukes Hall.