Document 8: Petition from the Woman's Christian Temperance Union for the Protection of Women to Congress, May 1888, HR50A-H13.5, Records of the House of Representatives, Box 147, National Archives and Records Administration, Washington, D.C.

Document 8: Petition from the Woman's Christian Temperance Union for the Protection of Women to Congress, May 1888, HR50A-H13.5, Records of the House of Representatives, Box 147, National Archives and Records Administration, Washington, D.C.

Although women often created and participated in social movements in order to defend "traditional values," their involvement in such movements sometimes undermined cultural norms that limited women's access to the public sphere. For example, the campaign to raise the age of consent, which began in the mid-1880s, was part of a larger movement to "purify" American society. Age-of-consent activists campaigned to raise the age at which girls could legally consent to sexual relations to at least eighteen. The age-of-consent campaign was a response to what reformers saw as a serious social problem--the seduction of working girls by men whom they described as sexual predators. The women involved in this movement became public figures as they campaigned for legislative changes, spoke publicly in support of their cause, and set up organizations to provide working girls with sex education. While the goal of the age-of-consent campaign was to protect female virtue, the campaign also helped create new opportunities for women. This petition circulated by and signed by women active in the movement, which also appears in "Age of Consent Campaign," illustrates women's public and political participation in the campaign. 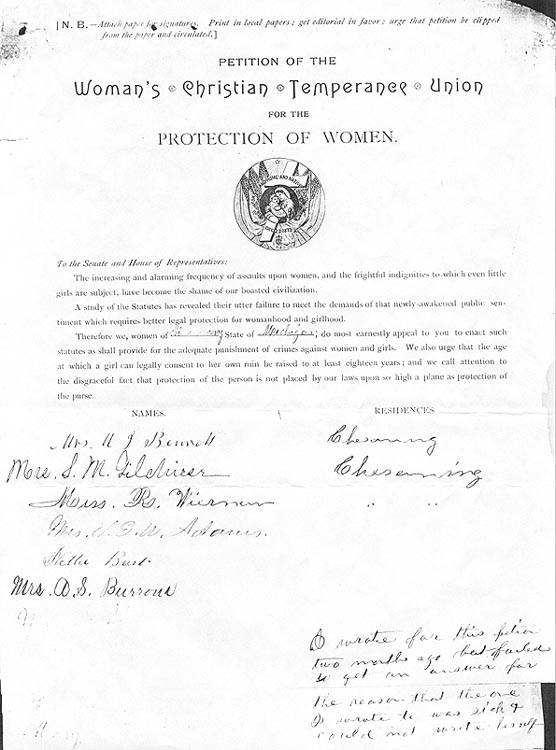 N.B.--Attach paper for signatures. Print in local papers; get editorial in favor; urge that petition be clipped from the paper and circulated.
PETITION OF THE
Woman's Christian Temperance Union
FOR THE
PROTECTION OF WOMEN

To the Senate and House of Representatives:

The increasing and alarming frequency of assaults upon women, and the frightful indignities to which even little girls are subject, have become the shame of our boasted civilization.

A study of the Statutes has revealed their utter failure to meet the demands of that newly-awakened public sentiment which requires better legal protection for womanhood and girlhood.

Therefore we, women of Chesening, State of Michigan, do most earnestly appeal to you to enact such statutes as shall provide for the adequate punishment of crimes against women and girls. We also urge that the age at which a girl can legally consent to her own ruin be raised to at least eighteen years; and we call attention to the disgraceful fact that protection of the person is not placed by our laws upon so high a plane as protection of the purse.

A. This petition was signed by about 400 people.
Back to Text

B. This note appeared in the lower right margin of the first page of the petition. It is unclear who wrote it.
Back to Text