What Infant and Maternal Health Services Did Middle-Class Clubwomen Provide
for Immigrant Women and Children in New York City, 1917-1920? 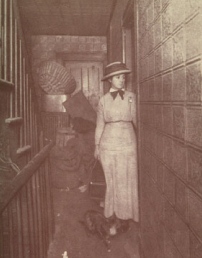 Infant and maternal mortality were higher in the nineteenth-century United States than in most industrializing nations, and such deaths were more common in poor families than in elite ones.[1] Higher American death rates were due in part to traditions of limited government that diminished the public sector's responsibility for human health. Unlike their German counterparts, American industrialists did not have to worry about birth rates falling beneath levels needed to foster industrial growth. Unprecedentedly high rates of immigration brought an ample supply of labor to American shores. Moreover, these immigrants, disproportionately young, maintained high birth rates. As a result, public responsibility for maternal and infant health was difficult to establish in the United States.[2]

Beginning in the 1890s American women reformers began to fill this void in public health care by creating institutions that could serve the health needs of recent immigrants, especially women and children. Lillian Wald's Nurses Settlement on Henry Street, founded in 1893 on Manhattan's Lower East Side, was one of the first of these. Wald established free milk clinics in New York, and her leadership helped create the U.S. Children's Bureau in 1912, a federal agency that was designed and administered by women reformers. Wald worked closely with another important innovator, Josephine Baker, who in 1908 established and directed the Division of Child Hygiene in the city's health department, the world's first tax supported agency devoted exclusively to improving the health of children.[3]

Building on these innovations, members of the Women's City Club advanced public health in a new direction by establishing New York City's first maternity clinic to serve women's pre-natal health needs. Founded in 1915, the Women's City Club was "an organization of about 200 women formed for the purpose of enabling women with civic interest to work together for the good of a community."[4] The Club's membership consisted primarily of middle- and upper-middle class women, most of whom were married and did not work for a living. Club work offered them an opportunity to participate meaningfully in the process of social change.[5] These documents give us the opportunity to view the process by which they created and developed a maternity center between 1917 and 1920.

The Center worked closely with the City Board of Health and the Henry Street Settlement. It offered preventive health care, and provided childbirth nursing assistance. In a widely-distributed flyer addressed "To Expectant Mothers," the clinic also offered "cheap material to make up into clothing for your baby," with sewing machines and nurses to help, and a "Mothers' Club" every Friday night where women could "have a good time!" During its first year the clinic treated over two thousand women with a salaried staff of seven, one obstetrical doctor, three nurses, and three clerical and educational workers. In addition, nurses affiliated with Center provided post-partum care for at least the first five days for all mothers treated pre-natally at the Center, and volunteer "housekeepers" helped new mothers at home. Twelve thousand babies under one year of age died in New York City in 1917, and about 75,000 pregnant women were entirely without medical or nursing care, so the need for these services was great. That year 17 cities in the United States and Canada sent 24 nurses and visitors to learn about the Center's work.[6]

The Maternity Center was created in conjunction with a study of the city's obstetrical needs commissioned by the Department of Health. That study suggested "that the city be divided into ten zones, each zone to have a Maternity Centre that would be a clearing house for all the maternity work in that zone, directing to hospitals those patients most needing hospital care and providing adequate home care for those patients to be delivered at home."[7] The Women's City Club focused its maternity services in a zone that included the Lower East and the Upper East Sides of Manhattan. Their clinic was located at 219 East 79th Street. Their "Zone 7" became the model demonstration center for the city and indeed the nation.

In 1918, a Maternity Center Association was formed to establish Maternity Centers throughout the city, and in 1920 the Women's City Club handed over their model clinic to the Association.[8] Club members had hoped that "governmental authorities" would assume responsibility for the clinic, but this did not happen until the passage of federal legislation, the Sheppard-Towner Maternity and Infancy Protection Act, made it possible in 1921.[9]