by Benita Roth and Marian Horan
[ view full citation ] [ share ]
Document 13: "Incident in the Shirtwaist Strike," New York Call, 29 December 1909. Included in What Are Social Movements and What Is Gendered About Women's Participation in Social Movements? A Sociological Perspective, by Benita Roth and Marian Horan. (Binghamton, NY: State University of New York at Binghamton, 2001).
Previous Next

Roth argues that women's involvement in social movements has not only challenged established forms of political action, typically restricted to men, but has also "transgressed" normative constructions of gender. Therefore, Roth states, women's movements and women in social movements challenge the status quo more than their male peers. Observers of women activists at times not only criticized their activism, but also equated that activism with masculinity. The following editorial cartoon, printed in the New York Call during the shirtwaist strike of 1909-1910, makes fun of this view of women strikers. It appears in another document project on this website, "Workers and Allies in the New York Shirtwaist Strike." 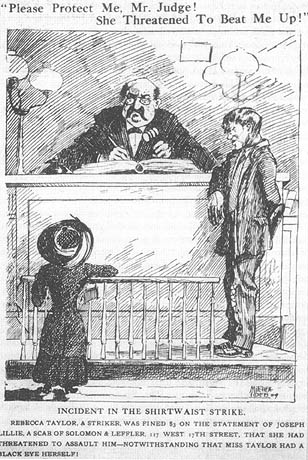