Local 341 celebrated the coming of New Year 1939 with a greeting in its local bulletin to fellow garment workers in Chinatown. They thanked various unions that provided support for their efforts, particularly local 1100 of the Retail Clerks' Union, whose members had honored their picket lines at the start of their strike against the National Dollar Stores. They reached out to "the rest of the Chinese garment workers," hoping that they would soon join them within union ranks. 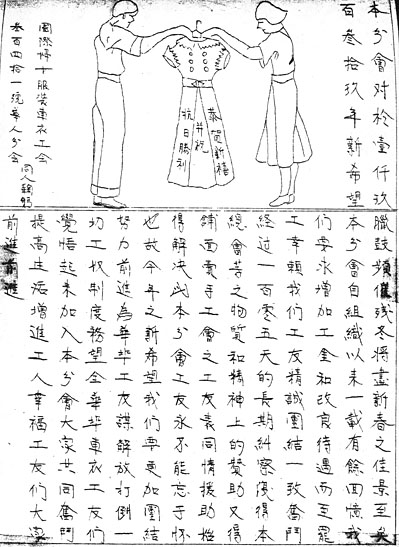 The following is a translation of the Chinese Greeting on the opposite page, which besides being in our Bulletin, was distributed among a thousand Chinese workers in Chinatown. The Chinese, as well as the English translation, was written by the Chinese members, themselves.

"WE GREET THE NEW YEAR WITH NEW HOPES. A YEAR HAS PASSED SINCE OUR LOCAL WAS ORGANIZED. IN THE LAST YEAR WE WON OUR FIRST STRIKE FOR UNION RECOGNITION, AND BETTER WAGES. OUR STRIKE LASTED 105 DAYS. WE OWED OUR SUCCESS TO THE SOLIDARITY AND DETERMINATION OF OUR MEMBERS TO FIGHT 'TO THE END' TO RAISE OUR LIVING STANDARD.

"WE ARE GRATEFUL TO OUR INTERNATIONAL FOR THE FULLEST MORAL AND FINANCIAL SUPPORT WHICH IT GAVE US SO GENEROUSLY. WE ARE GREATEFUL TO THE S.F. JOINT BOARD AND THEIR OFFICERS FOR THEIR GENEROUS HELP, ALSO.

"WE ARE ALSO GRATEFUL TO LOCAL 1100 FOR THE FULL SUPPORT THEY GAVE US IN OUR STRIKE. WE SHALL NEVER FORGET IT.

"WE ENJOYED THE PRIVILEGE OF A UNION SHOP FOR OVER HALF A YEAR, AND WE WISH THE REST OF THE CHINESE GARMENT WORKERS WERE WITH US. WITH THE BEGINNING OF THE NEW YEAR, WE HOPE THAT THEY WILL REALIZE, AS WE HAVE REALIZED, THAT A UNION WILL HELP THEM WIN BETTER LIVING CONDITIONS IN ALL CHINATOWN.

"WE GREET EVERYONE OF OUR FRIENDS IN THE ILGWU, AND WISH YOU ALL A HAPPY AND PROSPEROUS NEW YEAR."