Skip to main content
Women and Social Movements »
How Did Women Activists Promote Peace in Their 1915 Tour of Warring European Capitals?

How Did Women Activists Promote Peace in Their
1915 Tour of Warring European Capitals? 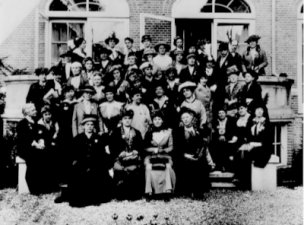 In the midst of World War I, from April 28th to May 1st 1915, 1,150 women from Europe and North America gathered at The Hague, Netherlands, and discussed peace proposals to end the war. This meeting, called the International Congress of Women, resulted in the adoption of a plan for continuous mediation with belligerent nations. To insure this goal, a delegation was selected to meet with governmental leaders to demand an end to the war.  For this peace mission, thirty delegates toured European capitals between May and June of 1915. Historians have focused on the International Congress at The Hague and its significance to the pacifist movement in the twentieth century but they have not examined the women's peace mission. The following documents focus on the American delegates’ experiences during their travels to European war capitals.

Focusing on three American women--Jane Addams, Emily Greene Balch, and Alice Hamilton-- we can see how they tried to promote peace through personal diplomacy. They placed a great deal of significance on their own country's neutrality. For them the neutrality of the United States carried a moral obligation to mediate a peace plan. Drawing on the collective will of peace-seeking women gathered at The Hague from the warring nations, they sought to translate American neutrality into a peace initiative.

Some critics labeled the delegates "sensationalists" and "Peacettes," implying the women’s cause could not be taken seriously. Many peace activists faced personal and professional censure, because of their beliefs.[1] To deflect criticism about their motives, Addams, Balch, and Hamilton paid their travel expenses for the tour. They were the only representatives to refuse to accept funds from other organizations, such as the Women’s Peace Party. Hamilton was not an official delegate; instead she accompanied Jane Addams as her personal physician.

The fact that Addams, Hamilton, and Balch did not hold political or governmental offices added to the effectiveness of their peace efforts. Addams, Balch, and Hamilton's insistence on being unoffical envoys resulted in frank discussions with a wide range of officials. All of the women gained the respect of governmental leaders on the tour, but the American women garnered special attention. One government official highlighted their effectiveness: "Of all the thousands of people that have come to intercede since the war opened, you are the only ones that seem to have something sensible to say."[2]

The American women viewed the tour as an opportunity to speak on behalf of average women who had lost husbands, fathers, and children as a result of the war. Their Letter to Prime Minister of Denmark elaborated upon this sense of responsibility to speak for women who did not have connections to the high government officials.   Emily Greene Balch’s statement "Never forget that public opinion is power" in her Survey article, "Peace Delegates in Scandinavia and Russia", illustrates her faith in the delegates' ability to influence public officials.[3]

The experience of the American delegates was shaped by the life long friendships among them. Jane Addams, Emily Greene Balch, and Alice Hamilton had known each other since the 1890's. Together they supported numerous social reform efforts in the United States, including the social settlement movement. Personal relationships enabled the American women to rely on each other for emotional support when faced with travel delays, financial problems, and frustrations due to the time constraints of their journey. This sense of friendship, combined with a belief in the pacifist cause, prevented the American women from becoming discouraged. They remained remarkably steadfast in pursuit of their goal of a just and lasting peace.

Their dedication bore fruit. Many of the women’s peace proposals were incorporated into President Woodrow Wilson's Fourteen Points. After the Treaty of Versailles ended World War I, Emily Greene Balch and Jane Addams remained active in peace organizations, such as the International Committee of Women for Permanent Peace and the Women’s Peace Party. For their persistent opposition to military ventures and their support for ethical treatment of people in wartime, Jane Addams and Emily Greene Balch won Nobel Peace Prizes in 1931 and 1946, respectively. Their work encouraged the creation of a non-partisan international organization, the League of Nations (founded in 1920) and the United Nations (founded in 1945).

These women envoys took an outspoken internationalist position at a time when many Americans still maintained an isolationist or a pro-war mentality. They and other delegates from the International Congress of Women saw beyond national boundaries and demanded peace-- out of respect for the dignity of the individual, regardless of nationality, ethnicity, or economic background. This faith enabled one of the delegates, Emily Greene Balch, to avoid bitterness when she lost her position in 1918 as a professor at Wellesley College. Instead, she said " I took a radical position by condemning the war and therefore endured the consequences."[4]

These documents follow the two separate journeys that Jane Addams (with Alice Hamilton) and Emily Balch undertook in visiting the capitals of the nations at war in 1915. The documents reveal the difficulties they encountered and how they persevered in their misson.