The ILGWU began organizing among Chinese garment workers in the fall of 1937 and immediately formed Chinese Local #341. The following Chinese-language flyer is undated, but it clearly came early in the organizing campaign and explained in concrete terms the benefits that workers could expect from joining the union. In the first months of the campaign, Jennie Matyas sought to get Chinese garment workers to sign petition cards designating the ILGWU as their bargaining agent. When a sizable majority of employees at the Chinatown factory of the National Dollar Stores had signed these cards, the union sought recognition from the employer. The company refused, but the union succeeded in getting a federally-supervised certification election. The bilingual ballot employed in that election is the focus of the newspaper account that appears in Document 5. 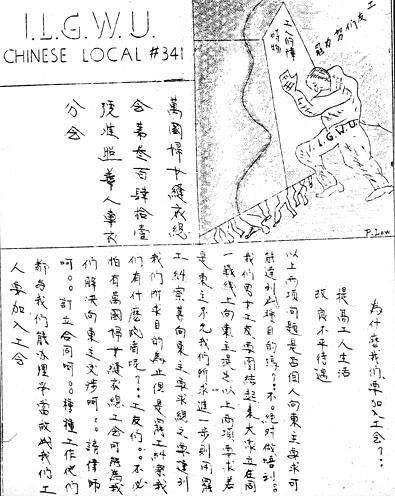 Why do we join the union?

Improve the lives of workers,
and eliminate unequal treatment.

Can anyone alone have the employer agree with these two issues? No. Impossible to be done: Our fellow workers, both male and female, need to unite. We need to stand in a single battle line to voice these two demands. If the employer refuses our demands, the next step will be striking, picketing, etc. until the employer meets our goals. But what obstacles may be present with striking and picketing? Fellow workers: Do not fear, the International Ladies Garment Workers Union can negotiate with the employer, and, even hire an attorney and sign the contract for us. They can properly complete this type of work for us: this is why we need to join the union.