Skip to main content
Women and Social Movements »
How Did the Women's International League for Peace and Freedom Campaign against Chemical Warfare, 1915-1930?

During the War, the United States created the Chemical Warfare Service to coordinate efforts both to defend American troops from German gas attacks by distributing gas masks and to develop the ability to wage offensive chemical warfare on the battlefield. General Amos Fries was selected to head the service. After the war, in the face of public sentiment that opposed the use of poison gas, Fries waged a public relations campaign to save the Chemical Warfare Service from being disbanded. This article skeptically discussed Fries's campaign to convince the American public that chemical warfare was a legitimate and morally acceptable method for waging war. For more on Fries's involvement in the conservative campaign against the peace movement, see another document project on this website, "How Did the Women's International League for Peace and Freedom Respond to Right-Wing Attacks, 1923-1931?"

THAT POISON GAS WARFARE is "humane" in character may come as a surprize [sic] to the thousands of "doughboys" who have not yet recovered from the effects of gas during the World War, believes the Seattle Times. Yet that is the contention of Brigadier-General Fries, Chief of the Chemical Warfare Service of the United States Army. His opinion, moreover, is upheld by a resolution by the American Institute of Chemical Engineers, and by American Army officers in general, according to the New York World. General Pershing, on the other hand, recommends that poison gas be abandoned in warfare. "Here is practical military knowledge against civilian chemical theory," remarks the Philadelphia Evening Bulletin, which reminds us that the civilian non-combatant population near the front in any war are the chief sufferers, since the death-dealing clouds of gas cannot be controlled, and may be carried by the wind for miles. "It is the business of the Chemical Warfare Service chief to develop the use of poison gas, and nothing is more natural than that he should be partial to its use, but his view is narrowed by his occupation," thinks the Louisville Courier-Journal; "as a man lives, so does he think." His theory, however, "will not appeal to the majority of laymen," declares the Pittsburgh Chronicle-Telegraph. "And the stand of such a distinguished professional soldier as Pershing should have a tremendous effect upon public opinion everywhere," points out the New York Evening Mail.

Among other proponents of chemical warfare is Professor Zanetti, of Columbia University, who was a Lieutenant-Colonel in the Chemical Warfare Service during the war. In a letter to the New York Times he sets forth views similar to those of his former chief:

"It is no secret," writes Frederic J. Haskin, in the Little Rock Arkansas Gazette, "to say that the chemical experts of all countries are hard at work devising new poison gases." Advocates of this new weapon contend that its use is justified on the ground that it will shorten hostilities. As we read in Chemical Warfare, the official organ of the Chemical Warfare Service, of which General Fries is the head:

By the use of airplanes, bombs, and poison gases of various sorts, "a great city could be destroyed in five minutes," maintains Thomas A. Edison in a New York American interview; "and in half an hour every living creature in the vicinity -- men, women and children -- could be burned to death or suffocated by these deadly gases." Yet, asserts Dr. Raymond F. Bacon, director of the Mellon Industrial Research Institute at Pittsburgh, "chemists know that the use of poison gases during war has come to stay." W. Lee Lewis also has this to say in the Chemical Bulletin:

"All of which goes to show that it is a pretty tough villain who is so bad that nobody can be found to make out a case for him," remarks the Duluth Herald. "The theory that by making war more and more horrible you diminish the chance of a war is an amazingly faulty theory," asserts the Baltimore American, and as the Louisville Courier-Journal puts it: 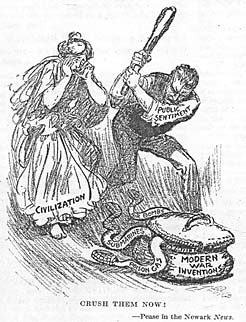 Many editors hail the report of the American Advisory Committee of the Washington Conference, advocating the abolition of poison gas, liquid fire, and other chemical agents in warfare. The Committee, it should be said, keeps in touch with public sentiment on certain matters that come before the Conference and advises the American delegates accordingly.

"America's influence at the Conference," declares the St. Louis Star, "should be thrown against the weapons that are directed against non-combatants -- the submarine and poison gas." 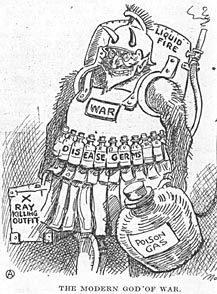 "Since a gas attack is uncontrollable, chemical warfare falls into the well-poisoning class," agrees the Norfolk Virginian Pilot, while the New Orleans Times-Picayune maintains that "as to the barbarity of chemical warfare . . . there is no argument." "For the present Conference to adjourn without a vigorous condemnation of such uncivilized weapons would be an evasion of its plain duty," avers the Pittsburgh Chronicle-Telegraph. "What is this 'humane' method of warfare of which the chemists speak?" asks the New York Evening Mail --

When all is said and done, however, agree the Louisville Courier-Journal, the Des Moines Register, the Baltimore Sun and a dozen other newspapers, "it is useless to forbid invention as the only way to prevent the use of aerial bombs, submarines and poison gas in war is to prevent war." Adds the New York Globe: