Scottsboro Mothers as well as other family members traveled widely in support of the International Labor Defense (I.L.D.) efforts to "Free the Scottsboro Boys," adhering at times to harrowing schedules and itineraries. In the first six months Viola Montgomery traveled across the Southwest; Mamie Williams Wilcox traversed the South with her one-year-old baby in tow; Ida Norris shuttled down the West Coast; and Ada Wright and her ten-year-old daughter, Lucille, spoke across the Northeast and upper Midwest -- in one marathon trip visiting ten cities and towns in Minnesota in as many days.

The Scottsboro Mothers came to New York City early and often. Janie Patterson led protests in Harlem in April and May 1931; Ada Wright followed her in May and June. These were just the first of many appearances in New York, where the mothers sometimes appeared as a group or with other mothers of political prisoners the Communist Party supported.

Ada Wright clocked the most miles and greatest notoriety for her six-month, sixteen-country trip through Europe in 1932. She accompanied J. Louis Engdahl, national secretary of the I.L.D., who collapsed and died in Moscow, the last stop on the trip. Returning to New York, Wright arrived bearing his ashes in a dramatic turn that could not have been better scripted.

In Europe, few welcome mats greeted this odd traveling couple. Some countries refused them entry, while others monitored and hindered their movements, and everywhere the Communist Party agenda resounded as the primary message. Although this tour can be viewed as the most egregiously exploitative of any use of the Scottsboro Mothers or the Scottsboro Boys, it had positive consequences in terms of raising consciousness of the Scottsboro Boys and race relations in general on the European stage, even as Nazism was poised to grip the heart of Europe. As the flyer proclaims, this humble Scottsboro Mother was now the "Ambassadress of the Negro People to the Workers of the World." 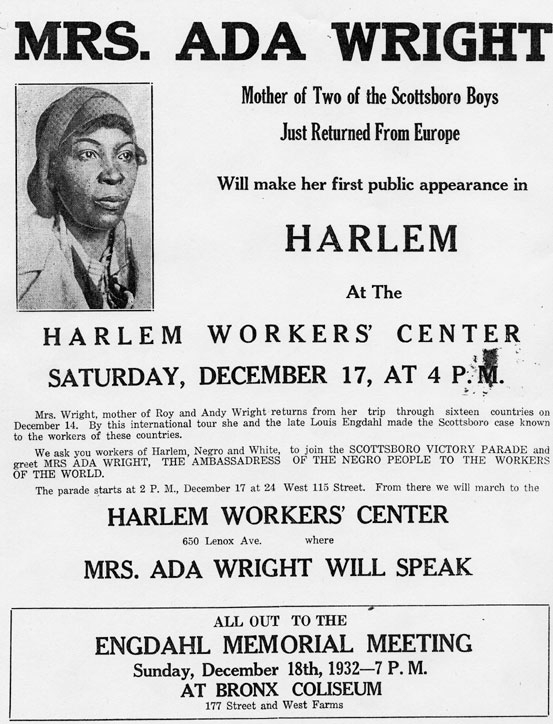 Mother of Two of the Scottsboro Boys
Just Returned From Europe

Will make her first public appearance in
HARLEM