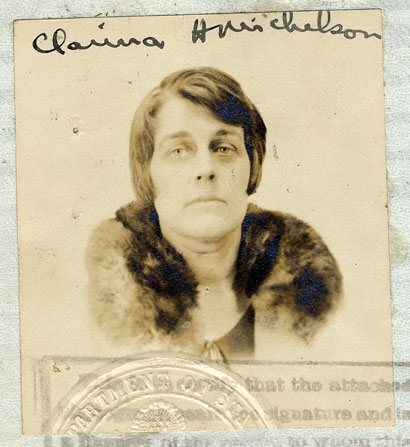 Clarina Michelson, an upper-class Bostonian, forsook her family's conservatism for a life of labor organizing and radical politics. As a Communist Party functionary in Harlem in 1932-33 at the height of the protests to "Free the Scottsboro Boys," she witnessed and participated in protests and struggled to mobilize Harlem workers to demand more of their government in areas of jobs, housing, and justice.

This oral history interview, recorded in October 1979 when Michelson was approaching 90, focused on Michelson's extensive organizing among office workers. Unfortunately there is no discussion of her experiences in Harlem in connection with the Communist Party's defense of the Scottsboro Boys. However, a number of passages speak to Michelson's motivations in becoming a union organizer and a Communist and thus offer insight into what might have led a white northern radical to sympathize with the Scottsboro Boys.

Excerpts from the Oral History of Clarina Michelson, 29 October 1979. [A]

C: I was born in Boston, Massachusetts. My family were very conservative, both Republicans. My father was a lawyer. And I've always, I think ever since I was quite young, couldn't see why a few people should have a lot of money and a lot of people have practically no money and so I used to read a lot about that. And I got very anxious to do something about it. And I thought charity, which my parents thought was the answer, you know -- was absolutely no good and that the Union was probably the answer, to have workers get for themselves better wages and better conditions and so forth, so I [got into] Union activity, support[ed] unions, and decided to be a Union organizer.

C: Well, I went to private schools and then I went to Radcliffe College. And I thought l'd get kicked out because I had a very good teacher of philosophy. I can't remember his name but he was very tough. And we had to write a … a essay after the course was over about what the course was, and when I wrote that I said I disagreed with … what the Professor had said. He said there was free will and I said I believed in determinism. So I wrote this long paper saying why I disagreed with all [he had said] and I thought l'd surely get kicked out. But I think he was quite amused at my -- you know -- taking that position, so I got a pretty good mark.

C: I didn't [graduate from Radcliffe]..No I didn't. I … just took some courses there. I didn't take the full thing.

D: So what did you do after you finished your formal schooling?

C: I organized textile workers down south, and I also, as I said, organized miners. … One amusing thing happened in a mine strike. We had a big meeting of miners. And they were pretty tough, that guy that owned the mines. And … during the meeting, after it had been going on for a little while, about three shots were fired into our meetings. So three miners immediately left. … So I said, "I'm terribly sorry that this happened and I don't think it'll happen again. And we have a great deal of business to take up and I think we should just act as if it didn't happen and let's go on with our work. And I'm awfully sorry those three men got frightened. I don't think they need to be." So one tall miner got up and he said, "ma'am, them three that went out ain't frightened. They went to get their guns." (laughter)

D: Where in the south … was this organizing taking place?

C: Well, the Mine Worker's Union. And as I said, … one of the nicer things I think, was that a Black from the south was elected Chairman … of the Local. So we did quite a lot to try to … William Foster came down there once, and a very, very moving thing happened.[C] I don't know if I told you people that. He was a Communist, you know, and he came down and … we had a big meeting scheduled for him. And he spoke at the meeting, as usual, the whites sat downstairs, the blacks sat up in the gallery. And Foster was very eloquent guy and he spoke about the need for unity and that blacks and whites must get together. It was the bosses that wanted to keep them apart so they could lower wages, and only by feeling brotherly to each other could they get what they wanted. And it was really very, very eloquent. And by the end of the meeting all the blacks had come down and sat among the whites, which I thought was just terrific and very moving.

A. Clarina Michelson is noted as "C" in these excerpts and her interviewer, Debra Bernhardt, is noted as "D."

B. The Rand School of Social Science operated in New York City between 1906 and 1956. The school offered working men and women a socialist perspective on contemporary culture, politics and socialist theory.

C. Willam Z. Foster (1881-1961) was a member of the Socialist Party and the Industrial Workers of the World and then of the Communist Party. He emerged out of the Party's factional conflicts in the 1920's a strong sectarian and served as the Party's chairperson from 1932 to 1957.